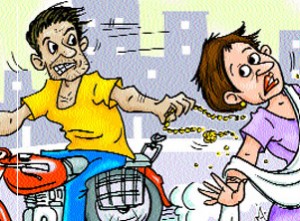 Nagpur Crime News: On Pitra Moksha Amavasya, an elderly woman, Kamal Kamlapurkar Balapurkar, 75,  as part of a ritual, went to feed cow near her house at 12.30 pm. Two youngsters both aged around 20 – 25  on a yellow coloured TVS Apache motorbike snatched the necklace she was wearing. The necklace is estimated to be around Rs. 20,000. Kamla is resident of Jivanchhaya Nagar near Pratap Nagar. A complaint  has been lodged against the unknown accused in Pratap Nagar police station.

In a strikingly similar incident two chain snatchers again struck gold. Meena Shrichand Thervani, 34 was walking with her sister from Apeksha Hospital to her father’s house near Jaripatka, Two youngsters again on a yellow coloured TVS Apache motorbike of around 20 – 25 snatched her gold chain of Rs. 15,000. Meena is a resident of Vani, Yavatmal. She had come to meet her sister who lives in Jaripatka. A complaint has been lodged against the unknown accused in Jaripatka police station.

Investigations are currently on.