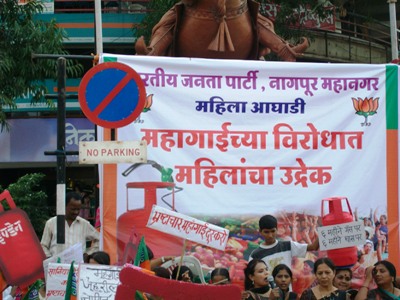 The women Wing of the BJP carried out a huge protest against the Congress Government with regard to the increase of prices of cylinders and the dissatisfaction towards giving only 6 cylinders instead of 7.

This particular protest was met by a large number of women from every walk of life. The protest started at 3.30 and carried out till 5 pm. The slogans made the protest even better as every slogan had its share of dig towards the government and mainly towards Sonia Gandhi.

Finally the women wing members together said that if Gandhiji was alive he would be crying today because of the way the government is making the prices of cylinders and various other things. They further added that nowadays when they go to the market firstly when they ask for anything they get a shock as to how much the prices have gone up and that is a concern for every women in the country.

They said that the government is totally corrupt and something has to be done quickly otherwise life will become impossible to live and people will be at starving point.