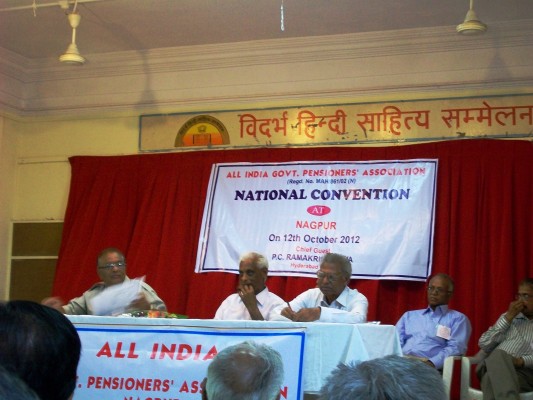 The all India Govt pensioners association Nagpur held a national convention at Hindi Mor Bhavan this afternoon to address various issues pertaining to the governments stand towards FDI and the way the governments handles the pension scheme.

The entire convention highlighted appoints of pension workers as to how they worked their life out of so many years and that they had been mistreated by the governments with respect to the pension scheme. These people who work their entire life in the services of the nation as government employees are considered redundant by their own departments and face multiple problems in the process.

The chief guest of the convention was Commodore. P.C.Ramkrishaaya (Hyderabad,A.P). He focused on topics like FDI, Pension scheme. Ramkrishaaya said that the FDI is only a channel to get back the black money earned by politicians into India way the route of foreign investors and that the FDI had no benefit to any person living in India. He also said that there have been several anomalies in the facilities provided to central and state government pensioners in various states. There are many cases where pension is not properly as per pay commission recommendations. The Central Govt. has granted family pension to unmarried daughter by relaxing age criteria but many state governments and even central government departments do not respond to individual pensioner when they come forward with their case. Some cases are so bad as many pensioners have attained the age of 80 years but still their pension hasn’t been granted to 20% and further on some banks from where pensioners draw their pension reduce their pension arbitrarily.

Ramkrishaaya then turned his talk towards corruption and spoke about the efforts of Anna Hazare  and told the people how he has stood up for the rights of the country and likewise the pensioners should also unite and fight for what’s wrong against the government . The pension given to us is not a favour from the government but the right of every government servant who has dedicated his life for his work and some of the people’s pension is a living source. Ramkrishaaya was very said with the state of affairs of the government and said that any government comes the state of affairs will be the same and appealed to the people that some change has to be done in order to have a better life in the future.

He finally summoned up his talk by saying that every pensioner should be given the same right and should be provided with Residential,Healthcare,Welfare and leave travel concessions as they were eligible during their service tenure so that they could maintain themselves with dignity  and carry out their family obligations.

General Secretary Jagdish Singh before giving the vote of thanks said that the ALL INDIA GOVT. PENSIONERS’ ASSOCIATION demands that all pensioners belong to the Central and State Governments be treated as par and all facilities should be provided to all pensioners irrespective of their being Central or State Govt. pensioner. In case, the departmental proceedings are being initiated during the service period should be completed within 3 months after the retirement in all aspects.

The convention witnessed pensioners from all over Vidarbha , Gondia  and various other places. The committee present at the convention were President Dr. Shashikant Waikar, Vice-president B.D.rao Verma,Treasurer R.S. Panpate and members T.B. Bisne and P.Y.Gadde