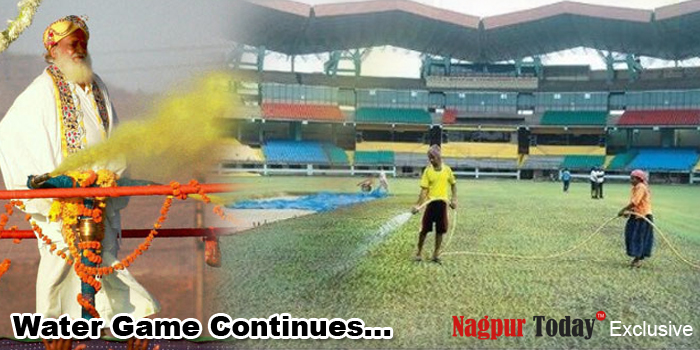 Nagpur News: What’s one similarity and one difference between Asaram Bapu and soon to start cricket celebration Indian Premier League Season-6 ? Surprised!!! Isn’t it the weird question? But still, any guesses? Here it is, Asaram Bapu recently caught the limelight for wasting water relentlessly to solemnize the Holi event and similar practice is being observed for IPL 6 too albeit on much larger scale.

Picture this – Severely drought hit Maharashtra will host 16 matches in Mumbai and Pune during the 8 week event. The pitches and grass will need at least 3,00,000 liters of water every week. In Maharashtra itself it will consume 48,00,000 liters of precious water just for ground maintenance, claims a post on social networking site. The difference between the two, however, is action was duly taken in the case of Asaram Bapu but no word came on water wastage during IPL.

Any thoughts of saying ‘No IPL in Maharashtra in 2013’ due to severe drought?

Nagpur-Today took this information to the leaders who have boldly raised their voice against Asaram Bapu for his unwanted Holi.

Reacting strongly State unit BJP President Sudhir Mungantiwar said, “This is very important information and we would certainly raise it in the Assembly. During Holi celebrations, Maharashtra Chief Minister Prithviraj Chavan took the initiative to send out bulk voice SMSes to the people across the state, appealing them to avoid wasting water and play water less Holi. Lots of hues and cries were made when Asaram Bapu wasted water for Holi celebrations and the government cancelled all the Holi events for going austere in saving water. But now why is the Chief Minister not taking any initiative in this regard? Our party would bring this to the notice of him in the Vidhan Sabha.”

Mungantiwar said that when it was unanimously decided that no water would be wasted any further going by the worst drought hovering over Maharashtra, then why is it not being extended to IPL. “It’s not the question whether some have ample water to waste or not. When the CM’s Holi appeal was followed in letter and spirit, then wasting such a huge quantity of water would be like sprinkling salt on farmers’ wound,” he quipped.

Nitesh Rane, President of Swabhiman Sangathan which blew the Asaram’s act beyond proportion and took the lead for the entire agitation, said that since IPL involves big guns and lots of money has been infused into the event, nobody is willing to take up cudgels against the undue wastage of water. He said, “We would certainly oppose such an act tooth and nail, but on the field itself. We would force them to stop such an activity in the wake of severe water crisis ahead.”

Rane said that the water crisis has worsened even at the onset of summer. “What will happen in the coming months is the matter of serious concern. Even if we dash out a letter to block water usage on pitches, then it will be kept aside. So you would be seeing us in action on the field itself, so that the matter should be noticed by one and all.”

As usual Devendra Fadnavis remains out of reach

Nagpur Today correspondent has been trying to call MLA Devendra Fadnavis since Saturday to get his reaction over the water wastage in IPL-6. The correspondent gave at least 25 ringers on different timings but he did not respond to a single even. Being a public representative Fadnavis has baffled many citizens out in Nagpur that what if they could not reach out to the one whom they have elected for their development. It has been now an open truth in the media that Fadnavis never picks up any general call. Surprisingly, most of the time his number remains unreachable.