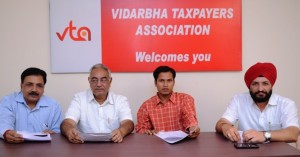 In a recently held meeting of Vidarbha Taxpayers Association (VTA) presided by its President J. P. Sharma, it is resolved to file Public Interest Litigation (PIL) before High Court, praying for direction to State Government and Urban Development Department (UDD) by High Court to take time bound decision on long pending proposal sent by Nagpur Municipal Corporation (NMC) for deletion of sub-regulation in Development Control Regulations (DCR) 2000 bearing No. 13.6.2 which deals with no shopping frontage 24 roads in the city of Nagpur.

Citizens of Nagpur have been strongly criticizing this regulation since its inception, which resulted in NMC carrying procedure as laid under section 37 of the MR & TP Act, 1966 and writing letter to Urban Development dated 31.05.2008, seeking approval from State Government for deletion of such illogical regulation from DCR 2000. Ironically State Government failed to respond on this in last 5 years.

J. P. Sharma president of VTA said that these 24 roads are main roads of Nagpur and are quite wide, likewise the size of plots on these roads are also comparatively large which can very well accommodate assembly like buildings and tower like structures. However due to this regulation 13.6.2 commercial construction is not permitted on these roads.

Tejinder Singh Renu, secretary of VTA said, surprisingly Nagpur is the only city in State of Maharashtra rather in entire Country to have such irrational regulation of no shopping frontage roads. In fact we fail to understand why such regulation is inserted in DCR for Nagpur by State Government; as such regulation is not in Capital, but second Capital facing all such crisis by this regulation.

VTA resolved that Advocate Harnish Gadhia shall be counsel for VTA, who also attended meeting, held yesterday and apprised members on the subject.