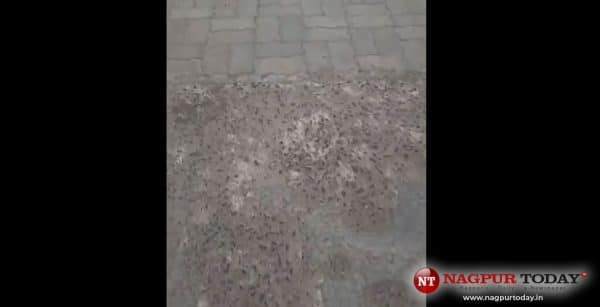 Nagpur: A cement road in Dharampeth Prabhag No. 15 constructed barely over a year ago is turning out be a nightmare for the residents. The cement road has developed many, huge potholes. Also, its surface layer has been damaged to a great extent. Rain water gushes into houses of nearby residents making their life miserable. The affected residents curse the local BJP Corporators, the contractor and NMC officials for the shoddy construction of the cement road.

The internal cement roads were built in Dharampeth, Gadga and Gawlipura coming under Prabhag 15. Despite bringing notice to the contractor and local Corporator, the level of cement roads have gone higher than the houses situated along the roads. This eneven construction has pushed citizens in a tight spot. People are exposed to multiple risks while carrying out their daily chores as contractors have ignored basic safety aspects while undertaking works on the cement roads. During the recent rains, water gushed into houses of residents. Moreover, poor quality construction has added woes of the residents. The contractor, instead of removing the illegally constructed chambers of Reliance Jio Internet, has increased the height of the chambers and brought them at road level.

One can imagine what would happen if someone is to lose balance on the uneven road surface and more worrying is difference in depth between tar road and newly-constructed concrete road. During the construction stage the contractor should have ensured that this site is levelled evenly to ensure smooth passage for vehicles.

A delegation of residents, led by Congress leader Adv Akshay Samarth, had met the then Municipal Commissioner Abhijit Bangar and had submitted a memorandum highlighting enormous hardships being faced by citizens following poor quality and uneven construction of cement roads in city. A video of the cement road was also made and shown to the NMC boss. The video has exposed the poor construction of the cement road, and the hardships being faced by residents of Dharampeth Prabhag 15.