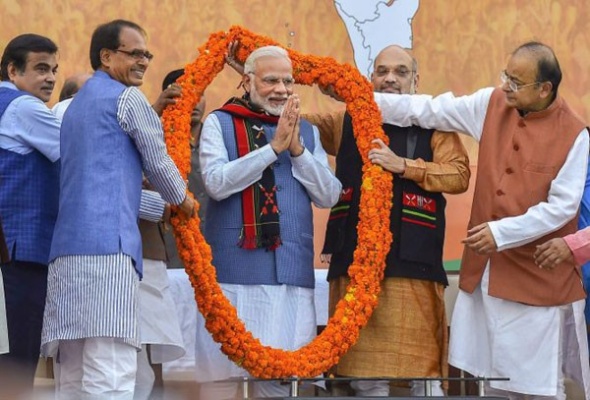 The Bharatiya Janata Party victories in three north east states would help it not only in achieving its ambition of a Congress-mukt (free) India but also to counter the law of diminishing returns it fears it might face in other regions of the country in the Lok Sabha election.

Party strategists are aware it might not be able to repeat its performance in the 2014 Lok Sabha election, especially in its traditionally strong bases in the north and the west, in states such as Uttar Pradesh, Bihar, Madhya Pradesh, Rajasthan, Chhattisgarh, Gujarat, and Maharashtra.

This is where the success in the north east and east is so important.

In September last year, at a meeting of the North-East Development Alliance that the BJP leads, party chief Amit A Shah said it would have governments in all the eight states in the region.

Prime Minister Narendra D Modi also instructed that one minister from his ministerial council should visit the region every fortnight. His office prepared a roster.

After the BJP won Assam in 2016 — establishing its first-ever government in the north east — Shah asked his lieutenants to identify Lok Sabha seats across the country that the party had never won.

They came up with a list of 115, mostly in the north east, West Bengal, Odisha, Telangana, Andhra Pradesh, Tamil Nadu, and Kerala.

Shah asked the party leadership to focus on these seats.

In Uttar Pradesh, it had won 71 of 80 seats; its ally Apna Dal won two seats.

In Haryana, Delhi, Jharkhand, Uttarakhand, Himachal Pradesh, and Maharashtra, it had performed impressively.

Repeating such a superlative performance will not be easy.

Madhya Pradesh, Rajasthan, and Chhattisgarh go to the polls in November-December, and in each state, the fight might be tough.

In Rajasthan, the BJP government has faced farmer protests, and there is a perception of its popularity eroding.

Farmer protests had also affected the popularity of its governments in Maharashtra and Madhya Pradesh.

Gujarat, which went to polls in December last year, showed how farmer unrest could affect the BJP’s performance.

Though it still managed to form the government, its tally went down by 16 seats to 99. The Congress, on the other hand, gained 16 seats, to raise its tally to 77.

Sources in the Opposition claim there is a strong possibility of an ‘index of Opposition unity’, even though they might not all come to the same platform. Not everyone in the NDA is happy either.

The Congress hopes to have an electoral understanding with the Bahujan Samaj Party in Uttar Pradesh and Madhya Pradesh.

BJP strategists obviously have all these factors in mind as they go about carving a new cache for themselves in the north east.

The Seven Sisters and Sikkim have a total of 25 Lok Sabha seats: 14 from Assam, two each from Manipur, Meghalaya, Tripura, and Arunachal Pradesh, and one each from Mizoram, Nagaland, and Sikkim.

The BJP already has governments in Assam, Arunachal Pradesh, and Manipur. After Saturday’s results, it will have a government in Tripura and be part of a ruling coalition in Nagaland. Its vote share improved significantly in Meghalaya.

The party owes much of its success to the good work done in the region for years by the Rashtriya Swayamsevak Sangh, especially the Vanavasi Kalyan Ashram in the tribal regions of Tripura and Arunachal Pradesh.

After the results were declared on Saturday, Amit A Shah said the golden age of his party would be when it won West Bengal, Odisha, and Karnataka as well. The Congress now has government only in Karnataka, Punjab, and Mizoram.

Elections to Mizoram will happen at the end of the year, but before that Karnataka is expected to be a big fight in April-May, with significant impact on national politics.

The demand for a National Democratic Alliance convener had already been voiced earlier.

However, after the BJP’s defeat in two by-elections in Madhya Pradesh, it is likely that alliance partners will step up the heat and demand a full time convenor. It used to be Sharad Yadav. But after Nitish Kumar went into the NDA, Yadav was turfed out.

The NDA has 16 parties in Parliament. However, the NDA also has 32 more parties that do not have any representation in Parliament.

In the Lok Sabha, among the NDA partners, the Shiv Sena has the maximum members, 18, after the BJP, followed by the Telugu Desam Party, 16.

Currently, BJP President Amit A Shah carries out the job of reaching out to alliance partners.