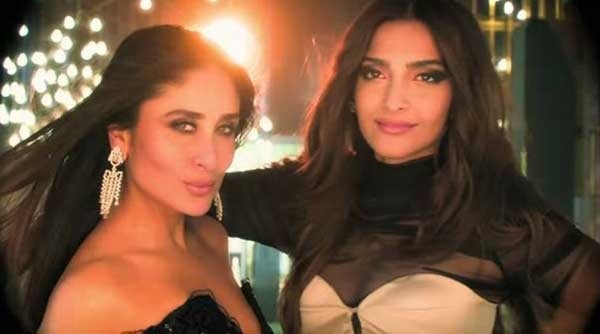 The first song of the most anticipated film of the year, Veere Di Wedding titled “Tareefan” was released by its makers today. The Shashanka Ghosh directorial stars four female leads – Sonam Kapoor, Kareena Kapoor Khan, Swara Bhasker and Shikha Talsania, and is produced by two women film producers, Ekta Kapoor and Rhea Kapoor. The peppy number witnesses a role reversal of this girl gang as they turn into boss ladies.

The song has been sung by Badshah, and has Sonam, Kareena, Swara and Shikha lip-synching to his voice. All four women are raising the temperature in their sizzling avatars as they dance around male models. In the three minutes long video, the song tries to change the regular notion about Bollywood, which has always been under fire for portraying women as objects of desire. In the song we see the four ladies indulging in a role-reversal and taking on stereotypical roles reserved for their male counterparts. From waiting for men to get ready, to paying their bills and even driving them around the clubs, Swara, Shikha, Sonam and Kareena are doing everything in style. The song is a promotional video and might appear in the end credits of the film.

The song composed and penned by Qaran has been choreographed by Farah Khan who has nearly 150 Bollywood songs to her credit. Talking about the song, Farah in a statement told IANS, “The concept of a gender swap really appealed to me. We made the boys the decorative pieces in the song with the girls being the heroes here. It was so much fun working with some truly empowered and enlightened women like Rhea, Ekta, Kareena, Sonam, Shikha and Swara.”

The producers Ekta Kapoor and Nikkhil Dwiwedi were all praise for Farah for making the composition look like a ‘dynamite’. After the song was shot, Ekta tweeted, “Just seen the best song coming out of our company after Baby Doll! Only #TAREEFAN for these amazing ladies who have been styled by #RheaKapoor. @Its_Badshah you have me addicted!!! The legend @TheFarahKhan has actually set the silver screen on fire! #VeereDiWedding,” and Nikkhil Dwiwedi wrote, “@TheFarahKhan you do deserve to put that ‘THE’ before FARAH KHAN !!! 😉 Wait till you guys watch the song #Tareefan. ITS A DYNAMITE!!” Farah too expressed her excitement of turning a choreographer after a long time. She shared several clicks from the sets while shooting for the song with the team.

Rapper Badshah who feels privileged to have worked with the four actors and Farah spoke about “Tareefan” to indianexpress.com in an earlier interview. “It is a fun song. I have sung it too. This is my second collaboration with Rhea and it is always great working with her,” he said.

To keep the buzz around the song alive ever since it was shot in a Mumbai studio recently, its makers have been teasing fans by releasing stills of its four female leads almost every day. In the photos, all the actors sported a sassy expression which blended well with their characters as we saw in the trailer of the film.