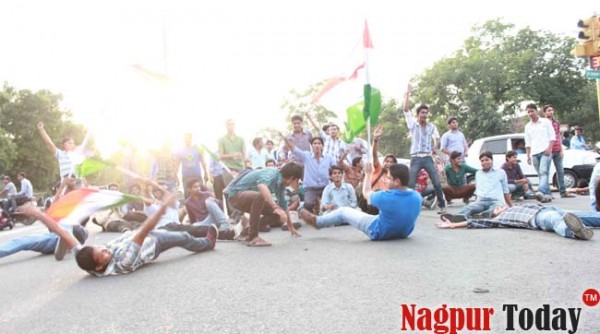 The engineering students with backlog of subjects were the cheered lot on Friday as they wore a winning smile on their faces. After days of agitation and observing hunger strike, the RSTM Nagpur University administration finally bowed to the demands of the students, though partially, on records. A notification in this regard has been issued by on Friday and posted on university’s website the same day. Earlier, Vice-Chancellor Vilas Sapkal had promised the agitating students that they would be allowed to complete their curriculum for next two semesters against the subjects’ backlog in the previous term. This implies that the students would be given two opportunities to clear their backlogs while they complete their theory, practical, internal and projects, if any, for the next semesters. However they would not be allowed to appear for the final examination unless they clear the backlog.

This move was also opposed then as it called for the ‘partial carry on’ while the students were pressing for full fledged admission that enables them to sit in the examination. However with the latest notification in force, the students with back in subjects would now be able to get admission in next semesters of their respective branches. The catch is that the students will need to clear the backlog of their previous semester subjects after which only they would be permitted to take the examination of the current semester. There will be only two attempts allowed for clearing the backlog of subjects.

The 6-page notification issued by the University’s registrar Dr. A.V. Gomase also points at the modification in credit based semester system and announced introduction of new subjects besides mentioning its earlier decision of bifurcating an year into two semesters.

Both the college principals and the students would be required to give an understanding in this regard. While the principals of engineering colleges affiliated to Nagpur University would have to own responsibility to get the course curriculum completed by the students availing the facility as per the notification.

Students have to give understanding on stamp paper

However, appearance in the final examination would be strictly based on eligibility. The students availing the facility are also required to file an understanding on a Rs 100 stamp paper that they would abide by the eligibility condition for appearing in the final year examination.

Then followed series of dharna in front of RTMNU premises for demands main CARRY ON, evaluation, revaluation on time, fees hike and various other demands. Political parties too jumped in agitation supporting the students, which did not last much longer.

On August 23 the engineering students under the banner of Students organization of Nagpur (STON) stepped up their agitation with 10 students going on indefinite hunger strike  at Samvidhan Chowk .

After a 14 days of agitation and hunger strike, finally it ended on September 5 upon the assurance Pro VC Mahesh Yenkie and Dr Babanrao Taywade that a notification on the demands will issued in day or two, which finally came out on Friday.