Pramod Prabhakarrao Dhankar (52), attached with NIT, was on duty with his team to remove the encroachments in front of Chandrabhaga Palace, Bandhugriha Nirman Sanstha, outer ring road, Swawalambi Nagar. A group of unidentified persons created ruckus and damaged the glasses of the JCB machine (MH 31 DZ 174). 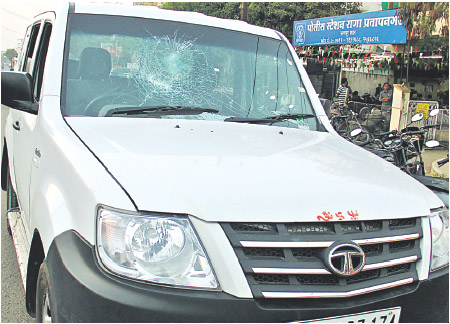 In another similar incident, Sensation prevailed in the Sahakar Nagar area after a few shopkeepers, whose unauthorised constructions in Chandrabhaga Apartment, on the London Street were to be demolished, resorted to stone pelting at officials of the Nagpur Improvement Trust, Thursday afternoon. The sudden and unwarranted attack caught officials unaware. According to officials, people who resorted to stone pelting were supporters of leader of the Opposition Vikas Thakre. After this the vandals went on to severely damage divisional officer Pramod Dhangar’s vehicle bearing registration number MH/31/DZ/174.

Official also claimed that Thakre’s supporters had even manhandled Dhangar along with the head of the anti-encroachment squad Vasant Kanhere and had threatened them. Members of the squad and officials were compelled to leave the area. NIT officials then reached the Pratap Nagar police station and reported the matter. They informed that the NIT had received information that as many as 10 unauthorised shops had been constructed at Chandrabhaga Apartments. After this a notice was issued to the shop keepers and they were asked to vacate the property. However, when the shopkeepers refused to leave it was finally decided that the illegal construction would be razed.

It is at about 3.30 pm that bulldozers of the NIT reached the spot and started action. It was then that Vikash Thakre reached the scene with his supporters. Before officials could understand what was happening few youths, part of the mob started pelting stones at the squad.

On the other hand, Thakre has denied the allegations and has said that it were residents of the area who had pelted stones at the squad and not his supporters. He rather claims to have helped the officials flee from the area safely. According to Thakre, he had reached the scene alone and local residents had clashed with members of the squad before he had arrived.