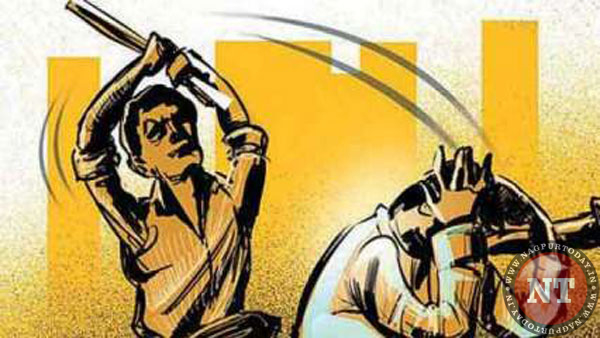 Nagpur: Two road rowdies including a juvenile attempted to kill two friends over a petty issue in Beltarodi police jurisdiction on Wednesday night. One accused has been arrested and the juvenile delinquent has been detained.

According to police sources, the complainant Rahul Anil Gadge (27), resident of Flat No. 401, Kasturi Nagar, Besa Road, along with his friend Swapnil Thakre (30), resident of Plot No. 17, Balaji Nagar, had gone to Hotel Radisson Blu for attending a marriage on Wednesday. They were returning home around 9 pm on their two-wheeler. Midway near Bharat Petrol Pump U-Turn, a Bajaj Pulsar bike (MH-31/EC 9232) zoomed past at break-neck speed.

As a result, the two-wheeler of Rahul and Swapnil skidded off the road. Following the incident, Swapnil shouted and asked the rider of Bajaj Pulsar bike to ride vehicle properly. Enraged by Swapnil’s caution, the accused Ankur Deepak Dhakate (22), resident of Narendra Nagar, near Mock Drills Hotel, and the juvenile delinquent ran towards Swapnil menacingly and abused him. Both the accused picked up a cement brick and hit Swapnil on his head hard with the intention to kill him. Seeing Swapnil in deep trouble, Rahul tried to save him but he too was attacked by the two accused.

Beltarodi Assistant PSI Sayyed Mushtaq, based on Rahul’s complaint, booked the accused under Sections 307, 323, 294, 34 of the IPC. The accused Ankur Dhakate has been arrested while the juvenile delinquent is detained. Further probe is underway.