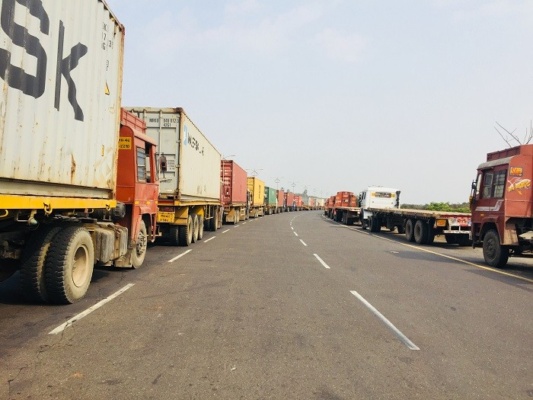 The truckers’ strike is already affecting terminal productivity, based on gate move statistics. Gate moves at APM Terminals-operated Gateway Terminals India on Thursday were much lower than the normal average, at 2,165 TEU, according to daily gate activity statistics posted on the company’s web site.

JNPT terminal yards may run out of import stacking space

Industry sources said if the strike does not end immediately, terminal yards will run out of space to stack imports and as a result, ships calling there will be forced to discharge JNPT cargo elsewhere — such as ports farther up the west coast — reminiscent of the situation during previous congestion incidents a few years ago.

The latest standoff was precipitated by a JNPT decision to award exclusive handling rights to four logistics services providers for the transportation of direct port delivery (DPD) shipments on five busy hinterland routes. The drayage community argues the policy is discriminatory and unfair; it wants the port to reconsider the decision.

At the same time, authorities do not appear to show any sign of relenting on the mandate handed to the selected logistics companies.

There is also no sign of negotiations or related talks to try to resolve the dispute.

JNPT handles the majority of Indian container freight, with roughly 85 percent of that transported truck. The port started fiscal 2018-19 on a moderate note — with April volume rising just 3.6 percent compared with April 2017.