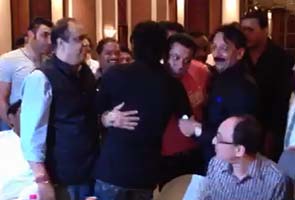 Photos from the iftaar party in Mumbai show the actors hugging each other.

Nagpur News:  Media is going crazy now, every news channel is running a breaking news  which read like ” Shah Rukh, Salman hug each other at Baba Siddiqui’s Iftar party “.

Yes, it is true looking, Photos from the iftaar party in Mumbai show the actors hugging each other.and video footage on Visual Media.

Two of Bollywood’s biggest superstars, Salman Khan and Shah Rukh Khan, have ended one of the film industry’s most-talked-about feuds.

The actors had not spoken to each other since 2008, but at a recent iftaar party, they buried the hatchet.

Baba Siddiqui who initiated the meeting said, “It was nice to see the two of them greet each other at the Iftaar. They embraced each other and even shook hands. I hope they become friends for life now.”

An eye witness said, “Shah Rukh Khan shook hands with Salman Khan and both even hugged each other surprising the guests present at the Iftaar.”

The witness added, “Shah Rukh was sitting with some people when Baba Siddiqui along with Salman came from behind and tapped on his shoulder and told Salman is here, Shah Rukh stood up went up to Salman Khan and hugged him. Both had broad smiles on thier faces.”

Both the actors have not been in talking terms for more than five years now.