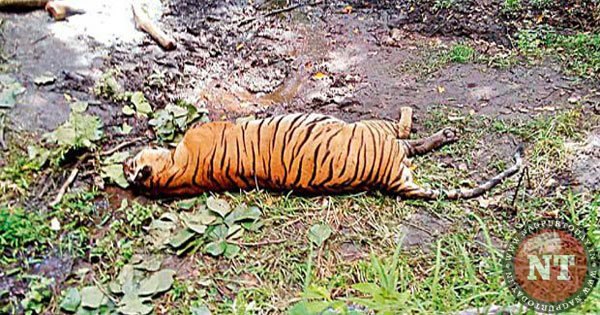 Nagpur: Even as the skeletons keep tumbling out of the closet in regard to the controversial killing of tigress Avni or T1, the probe by the Centre appointed committee has exposed many loose ends and blatant violations of NTCA guidelines in the case. All the claims exuded by the forest department fell flat as the probe officials have found out that three-day-old ineffective dart was used to hunt down Avni. Besides, allegations of a highly restricted drug being sold to the forest department have also come up to haunt the authorities.

Nagpur based wildlife biologist Milind Pariwakam representing Maharashtra forest department has mentioned in his report on Avni’s post mortem that “fascia (connective tissue under the skin) beneath darted needle was intact”. This was due to the fact that the tigress was shot from a distance that rendered the dart ineffective.
With the anesthesia requiring up to 30 minutes to work, experts say the tigers should ideally not be darted at night. Avni was killed at 10 pm. Once darted, a tiger can flee rapidly, making it virtually impossible to track it unless the area is a closed off space.

There have even been cases of tigers heading for water bodies and subsequently drowning. NTCA guidelines mandate that night-vision binoculars be used.

It may be mentioned that the state forest department had dubbed T1 tigress as man eater and held it responsible for the death of 13 people. Following the series of backs and forths, tigress Avni was eventually killed on November 2 by Ashgar, the son of Hyderabad-based controversial shooter Nawab Shafat Ali Khan. Later it was alleged that no attempt was made to tranquilise the big cat and was killed in a jiffy.

The accusations sparked verbal spats between state forest minister Sudhir Mungantiwar and union minister Maneka Gandhi. Followed by all the uproar, two separate committees were formed to probe the death: one under the ambit of the National Tiger Conservation Authority (NTCA) and another under the state government.

Sources in the Union Ministry of Environment and Forest (MoEF) said that the committee under the centre’s NTCA found a series of inaccuracies in the claims made by the state government and concluded that the ‘self-defence theory’ was brought in to try and obscure the issue.

After Avni’s death, Maharashtra Principal Chief Conservator of Forests (Wildlife) A K Misra had claimed that the tigress was shot dead in self-defence. He had said that a team along with Asghar was tracking the big cat.
“Forester Mukhbir Sheikh managed to shoot a tranquiliser dart at her. But she got furious and charged at the team, forcing Asghar to shoot in self-defence from a distance of about 8 to 10 metres,” he had claimed.

Both Misra and the Nawab refused comment on the statement.

The negligence began with the dart itself and sources from the MoEF and state forest department told a section of media that the dart was prepared three days before the incident. Not only is it against the norms prescribed by the NTCA, it also makes the dart virtually ineffective.

The report questions a series of issues pertaining to the role played by the nawab and his son Ashghar, including the allegations of the dubious sale of ketamine – a highly controlled schedule X drug – to the forest department.
“There is an ongoing investigation because earlier in the year, during a different case, he (nawab) had offered to give us ketamine, which we use to tranquilise animals. However, we found that these were expired and the receipts for the substance were also suspicious. The matter is being probed,” said a source in the Maharashtra forest department.

Ketamine contains psychotropic drugs and has often been used in date rape cases, investigators have found. The conclusion of a “pre-meditated kill” also fits in with what investigators found with regard to the time period between the dart and the shot being fired. “It was done a very short period of time. The bullet was fired within no time, and as a result, even if the dart had been effective, the tranquilising chemical would not have transmitted to internal angles. Even for smaller tigers, you need at least 15 minutes for the drugs to be effective,” said the source.