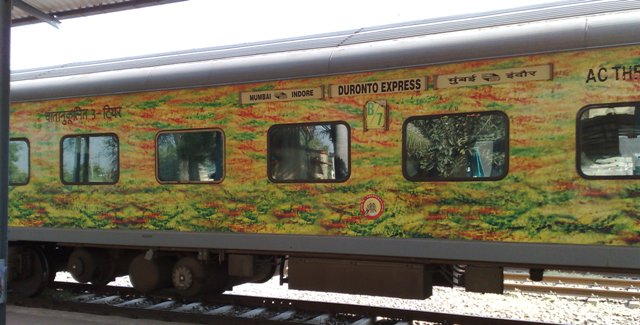 A media officer who was traveling on Duronto Express from Mumbai to Nagpur was relieved of cash and gold ornaments worth Rs 2.10 lakh on November 8, 2013.

According to information, media officer Ziko Ray and his wife Sheetal Ray boarded Duronto Express from Mumbai on November 8, 2013. The Rai family was coming to Nagpur. The GRP at Nagpur Station said that the theft took place in the early hours of Saturday between 4 am and 6 am. Thieves made away with the bag containing Rs 7,000 cash and gold ornaments collectively worth Rs 2.10 lakh from his wife while they were asleep.

In an exclusive talk with Nagpur Today, Ray said that he discovered something very surprising about the entire theft. He had kept the bag which contained the wallets of both husband and wife which had collectively Rs 7000 including coins. There was a small jewellery box in the bag. Three other bags were stored under the seat, while the small bag with cash and jewellery was kept near the thighs of Ray. According to Ray, the couple did not sleep till 3:30 am. When Ray got up somewhere at 5:45 am, he found the bag missing. He immediately raised an alarm and called the coach attendant to check everywhere for the bag. The couple too checked everywhere. Finally on checking the toilets, they found the bag with the contents strewn in the toilet. They found both the wallets without the cash. He added that somehow the thief did not take the debit and credit cards from the wallet. The jewellery box too had the same treatment. The original jewellery was taken and fake jewellery was left behind. According to Ray and his wife, somebody must have been watching them keeping the bag close to them assuming valuables were in it only. He or she finding a right opportunity must have committed the theft since the coach attendant claimed that no outsider was seen entering the coach. By the time, Ray began the search; the train was entering Nagpur Station. Ray also alleged that surprisingly there were no GRP personnel on the train. Even the TT could not locate one. Ray added that Duronto Express is a premier train service with no stoppage except for 3 technical stoppages. The cost of ticket too has been recently hiked. The question that was nagging him was when the railways are charging a hefty amount; they should be providing adequate services too. This also requires Railways to provide adequate security to the passengers and their goods. He said that if ACII Tier passenger can be robbed, what will the fate be of ACIII Tier or Sleeper Class passengers.

He also added that how do vendors who are not authorized vendors of Railway; enter the coach selling Biryani and other stuff in ACII tier coach. Who opens the entry/exit doors to these vendors? The coach attendant too is not a railway employee. The Coach attendants are out-sourced employees, who carry no onus of any happening in the coach.

After reaching Nagpur Station, Ziko Ray lodged a complaint with GRP. Investigating officer Bhawal said that the theft could have taken place before the train reached Wardha station. Government Railway Police (GRP) has registered a case of theft in this regard and have started investigations.