The long time dispute between the Futala lake food kiosk owners and its contractor Sell Ads has stirred the hornets’ nest more recently, when the clash snowballed into major controversy and acquired alarming proportions. The trail of allegations and counter charges followed. However the fact still remained untraced.

Nagpur Today delved deeper into the root of the dispute and what came out opened up the truth of allegations made by kiosk vendors.

It started when Nagpur Improvement Trust awarded the contract for management and maintenance, improvement of infrastructure and development around Futala lake premises to Sell Ads for the period of 5 years, from February 17, 2010 to February 16, 2015.  The contract was forthrightly given on public private partnership (PPP) basis.

As per the plans, NIT entrusted the responsibility of maintaining cleanliness, securing natural ambience and taking care of permanent structure at Futala Lake with Sell Ads who would ensure its earning through hoardings display of advertisements, setting up food kiosks and its operation, parking collection from the designated parking way, fund generation through events organization, income from allowing fishing at the lake and few other resources.

The clause 4.14 of the agreement between NIT and Sell Ads read the latter is permitted to set up 20 food kiosks whereas clause 4.20 provide for giving out space to additional 10 mini hawkers. The clause 5.5 on page 16 of the agreement specifies permission to Sell Ads that it can sublet the space through framing its own subsequent rules for food plazas, kiosks and other entertainment activities at the spot. NIT had, on April 15, 2010 also issued no objection certificate to Sell Ads in this regard.

Sell Ads had also submitted a plan for setting up 20 kiosks to NIT which neither approved nor rejected it. As per the NIT rules, if no hearing or proceedings take place within 3 to 6 months, then the plan is understood to have been approved. On the basis of this rule, Sell Ads started with erection of kiosks.

On January 6, 2011 NIT dashed a letter to Sell Ads, which stated that a writ petition was filed by Punjabrao Krishi Vidyapeeth (PKV) in High Court against carrying out construction on the Futala space owned by it. The court upon hearing the petition ordered NIT to stay the construction work by Sell Ads. NIT followed the suit. PKV in his petition had also submitted the photographs of few of the food kiosks under construction. These included Dinshaw’s, Goli Vada Pao, Lakeside Grill, Domino’s etc. This turned the bone of contention for the kiosk owners at this place, who alleged the construction as illegal. The recent controversy erupted from this issue only.

Meanwhile, NIT wrote to PKV on September 2, 2011 apprising the latter that the space in question has been allotted by NIT itself and Sell Ads was undertaking the work of 20 kiosks vide its due permission. NIT also mentioned that the erections were temporary.

Later on March 26, 2012 an understanding was made by NIT, PKV and Sell Ads in the High Court. The agreement said that NIT would pass on half the income it generated from Sell Ads, to PKV authority. PKV also made NIT to give an undertaking that there would be no commercial activity than 20 kiosks and beautification of the lake would be enhanced. Following this agreement, Sell Ads restarted the work.

On the fateful day of May 23, 2013 NIT served notices to all kiosk owners that additional construction had been illegally carried out in their establishments and it should be demolished within a week. Following this notice, all the concerned kiosk owners stopped paying rent to Sell Ads alleging the contractor of illegally allotting space. They formed an association and led their delegation to NIT Chairman, demanding termination of contract to Sell Ads. Few of the kiosk owners were not paying the rent even before the notices were served.

Big reason behind non-payment of rent

In February this year, former NIT employee Purushottam Ghormare, also the indirect owner of 2 kiosks at Futala, got a reply from NIT against his query under Right to Information that area marked as B-4/R-9 has been designated for parking. Overambitious Ghormare then got all the kiosk owners into confidence and advised them not to pay any rent to Sell Ads. He also tricked them into the assurance of getting the shops registered in their own names. Ghormare even hinted about the laxity in NIT, which he reportedly used for getting his move right. NIT then followed with the report that added fuel to the fire.

A PIL in this regard has been filed by Sanjay Agrawal of People Against Corruption in the High Court, which may come up for hearing on October 24.

–       First complaint was lodged on February 16, 2013 against former NIT employee Purushottam Ghormare who allegedly thrashed a worker of pay and park facility at Futala lake.

Third case came up when kiosk owners lodged complaint against Sell Ads for carrying out illegal erections and committing fraud. However, it came out that the concerned complainants first agreed for pay and park facility. As far the illegal construction was concerned, Sell Ads claimed that that allegations stand void in the light of the fact that the concerned kiosk owners have not paid any rent till date. 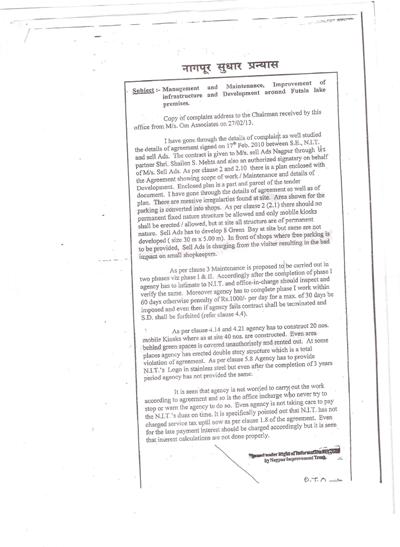 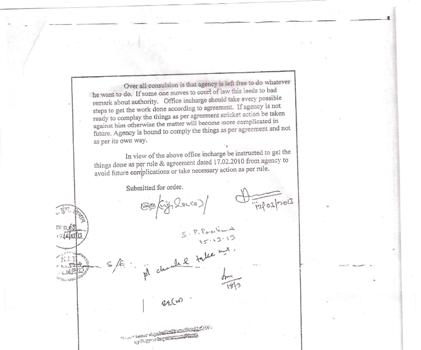