Nagpur News: VHA  U-17, U-14 School Hockey League
Nagpur News: The match between St. Joseph Vidyalaya and R.B.G.G School Under-17 and Swami Narayan School and Railway Jan-Mandal School Under -14 reached to an exciting peak and forced the football fans to stay unmoved. 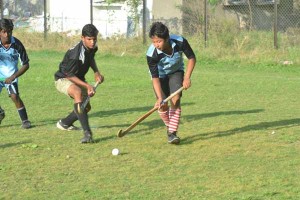 1st and only goal by Vikram Rajput on 45th min.

1st and only goal by Pawan Darvai on 32 min.