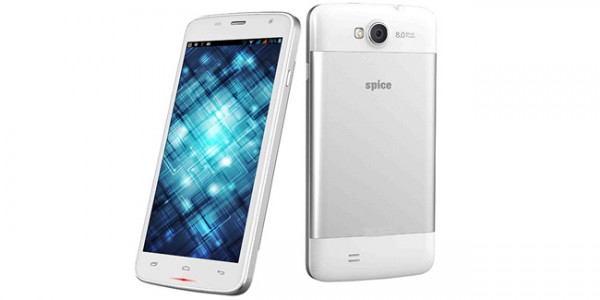 Launched on Monday, the brand new gadget by domestic handset maker Spice, Smart  Flo Mettle 5X is sure to attract those looking for stylish features in economical range. The most compelling feature is its unlocking style. There are 8 unique unlock styles including stare, blow or voice unlock. So just make an eye contact and your Smart Flo Mettle 5X unlocks for you to explore more features inside.

This dual sim 2G smartphone runs on Android 4.2 Jelly Bean and is powered by a 1.3GHz Dual Core Processor.The phone has pre integrated BBM, Quad Band on 2G three feather touch keys and a flip to mute feature. The phone has a 8MP rear camera with Auto Focus and a super power saver feature to augment the 1800mAh battery. The 8 unique unlock styles include Voice Unlock, Quad Band on 2G among others.

Unlike a lot of phablets which tag along a quad core processor, the Spice contender is satisfied with a dual core one. Speaking of memory, you can even expect 4GB of internal storage that is easily expandable by up to 32GB using a microSD card.

As for the cameras, a 1.3MP snapper acts as the medium for video conferencing, whereas an 8MP autofocus snapper with LED flash graces the rear side. There’s voice unlock feature and the phone is fueled by a 1800mAh battery. And that’s not all, the BBM instant messaging application has also been pre-loaded on the device.