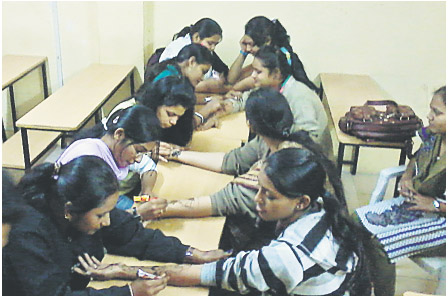 The Recreation and Cultural Committee had decided to conduct the competition. It was an open competition in which both boys and girls took part. This new idea brought in an element of excitement among the students.

The competition was won by BCA II year student Preksha Zade and BCA I year student Pallavi Kale stood second. The secretary of college Neha Mishra appreciated the artistic skills of the students and praised the college Recreation and Cultural Committee for organizing this competition.

The girls and boys who enjoyed every minute of the day said, “they were happy with the college authorities decision to organize the competition”.