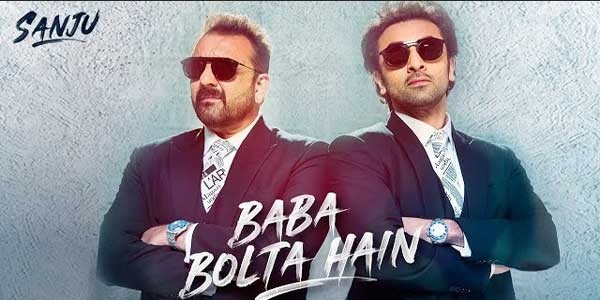 New Delhi: Ranbir Kapoor starrer ‘Sanju’ hit the theatres on June 29, 2018. The movie has received a thunderous response at Box Office and minted over Rs 30 Crores on day one! ‘Sanju’ smashed many past records and became the biggest opener of 2018. The film is based on life of Sanjay Dutt and takes the audience on a roller-coaster ride that is high on emotions. Ranbir’s performance has been widely appreciated and even Sanjay Dutt gave a thumbs up to the film.

A new song from the film has been released on YouTube. Titled as ‘ Baba Bolta Hain Bas Ho Gaya’, the song features Ranbir Kapoor and Sanjay Dutt. The two actor’s camaraderie is winning hearts and the song has over 1 million views already!

‘Sanju’ has stood up to the expectations which were quite high.

The film is directed by Rajkumar Hirani and narrates the tumulous life of Dutt until his release from the Yerwada Jail in Pune a few years back.