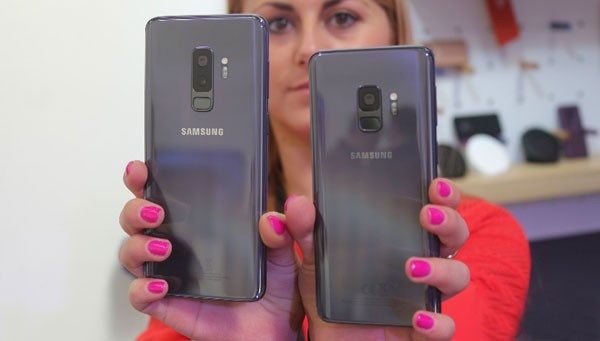 The premium Galaxy S9+, on the other hand, is priced at Rs 64,900 for base storage with 64GB variant, whereas the top end 256GB variant will set you back by Rs 72,900. I got to try our both smartphones ahead of the official launch, and here are my first impressions.

Samsung has retained the 5.8-inch QHD+ Infinity Display with 18.5:9 aspect ratio, and the 6.2-inch QHD+ display on the “Plus” variant. You still get the dual edge curved display that adds aesthetic appeal to the smartphones, along with the front and back glass design which gives it a premium look. One of the important design changes comes at the back where the fingerprint sensor is now placed under the camera module, making it easier to locate. This will also ensure that you don’t accidentally touch the camera module and end up smudging it. The Galaxy S9+ also gets dual camera modules, and they are placed vertically.

Powerful processing, more storage and Android Oreo
Both smartphones are powered by Samsung’s own Exynos 9810 octa-core SoC variant, and both of them are built on 10nm process. While the Galaxy S9 comes with 4GB of RAM, Samsung has added a little extra (6GB RAM) on the Galaxy S9+. The storage options also see a change, and you can now choose between 64GB, and 256GB variants. A hybrid microSD card slot to expand storage up to 400GB is also present.

The smartphone runs Android 8.0 Oreo out-of-the-box with a layer of Samsung’s custom interface running on top. The UI is fluid and snappy, and there are less number of bloatware apps than before. The little time I spent with the smartphone at the launch event, I did not encounter any lag, even with a few apps open.

Dual aperture camera on Galaxy S9
The photography department has always been a focus for Samsung smartphones, and the new Galaxy S9 duo continues with the tradition. If you were wishing that the compact Galaxy S9 could come with a dual camera setup, you’re likely to be disappointed. The smartphone comes with a single 12-megapixel camera featuring a variable aperture lens, where the f-stop number ranges between f/1.5 and f/2.4. I would also like to highlight that f/1.5 aperture is the largest on a smartphone.

Samsung says that the camera can intelligently detect the lighting condition, and switch from f/1.5 aperture in low-light scenarios to f/2.4 in broad daylight. The Galaxy S9 can now shoot super slow-motion videos in 960fps, and from the demo that I saw at the event, I am completely amazed. Unlike the Sony Xperia XZ Premium where you need to hit the slow-motion button to slow the frames, the Galaxy S9 intelligently detects the motion, and slows down the frames.

Dual cameras on Galaxy S9+
While the Galaxy S9 comes with a single rear camera, the Plus variant boasts dual cameras at the back. Both cameras come with optical image stabilization to help you capture blur-free photos and videos. At the back, you now have one 12-megapixel dual aperture camera (ranging between f/1.5 to f/2.4) with wide-angle lens, and a 12-megapixel telephoto lens with aperture f/2.4.

Together, the cameras help you capture photos with DSLR-like bokeh effects and wide-angle photos too. You also get 2X lossless optical zoom. I clicked a few phots at the event, and the quality looks promising. Samsung also demoed the low-light capabilities in the demo zone, and if you were impressed with the Galaxy S7 and Galaxy S8 duo, the Galaxy S9 Duo are more likely to impress you once again.

Interactive conversations with AR Emojis
Samsung, in its presentation, mentioned that 5 billion emojis are shared daily and the new feature will make your conversations more interesting. Up front, both smartphones come with an 8-megapixel front-facing camera of f/1.7 aperture, and feature autofocus too for clicking blur-free selfies. You can also use the front camera for AR Emoji.

Similar to Apple iPhone X-like Animoji feature, AR emoji uses facal recognition, and can quickly transform your expressions into emojis. I tried the feature for a bit and it is indeed interesting, but I will reserve my judgment until I review the smartphones.

Improved Bixby
I got to test the improved Bixby during my time in Barcelona where most signboards outside and restaurant menus were. You may come across similar situation at different places across the globe and to help you with that, Samsung has improved Bixby vision feature on both the Galaxy S9 and Galaxy S9+.

You now get live translation feature that can translate text from one language to the other. And the best part is, unlike before, you don’t need to highlight the text to translate, it can do on its own. It also supports Indian languages such as Hindi, Punjabi, Bengali and Gujarati amount others.

Security and features
Both the Galaxy S9 and Galaxy S9+ let you safeguard your smartphone in a number of different ways. The usual options such as PIN, pattern and password are available, like any other phone. And while the fingerprint sensor and IRIS scanner are available for biometric authentication, Samsung has also added 3D facial recognition feature where your face is your password to unlock the smartphone. I did not get the chance to test it, bit we will thoroughly test it when we review the smartphones.

Both smartphones are also IP68 certified for water and dust resistance, and you can submerge it under 1.5-meter water for up to 30 minutes. They also supports Samsung Pay with MST technology for cashless payments, and DeX that turns your smartphone into a desktop computer when connected to a monitor or TV, along with a keyboard and mouse. You also get stereo speakers on both smarthones tuned by AKG and Dolby ATMOS certified.

Initial impressions
The Galaxy S8 duo were impressive smartphones in every sense, and even though the Galaxy S9 is more like an incremental upgrade with minor design tweaks and under the hood hardware upgrades, the dual aperture camera is something to look out for. And features like face recognition and AR Emoji are surely the attention grabbers. We are eager to test the new Galaxy S9 and Galaxy S9+, and we will bring our review of the smartphones soon. Till then, stay tuned.