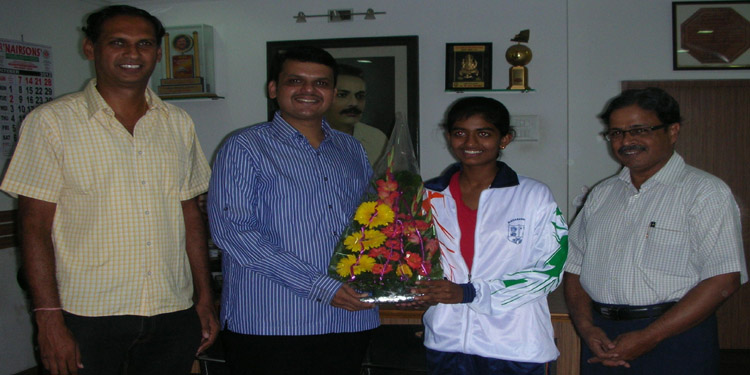 Nagpur News : Rucha Ulhas Aurangabadkar a player from Shivaji Nagar Gymkhana, Nagpur got selected for Indian camp of Under 14 Girls to be held at IG stadium, New Delhi from 29th Oct to 29th Nov 2012. Rucha got selected on the basis of her performance in the Sub Junior Nationals held at Goa in May 2012. The one month Indian coaching camp will be held at K D Jadhav Indoor Hall at IG stadium. Previously Rucha represented Maharashtra state in Delhi School Nationals for Under 14 girls in Dec 2010 where she got Silver medal. In Sept 2011 she represented Maharashtra state in Mini Nationals held at Lucknow and secured Bronze medal. In Nov 2011 she represented Maharashtra in School Games federation of India’s U-14 Nationals at Rajnandgaon (Chattisgarh) where the team finished third having Bronze medal.

Rucha is trained at Shivaji Nagar Gymkhana ground under the coaching of Shiv Chatrapati Awardee, Shatrughna Gokhale who himself attended the Indian camp in 1992. M.L.A. Devendra Fadnavis, President of Nagpur District Basketball Association congratulated Raucha and gave her best wishes for the coaching camp and the further performance. Rucha, a student of Modern School Koradi is daughter of noted Advocated Ulhas Aurangabadkar and Mrs. Kavita Aurangabadkar.