Hundreds of students of some of 250 blacklisted colleges shouted high-pitched slogans demanding they be allowed to appear for examinations. Since the issue is in the High Court, the RTMNU did not accept the examination forms of the students who had taken admissions in such colleges and thereby disallowed them to appear in the examinations. 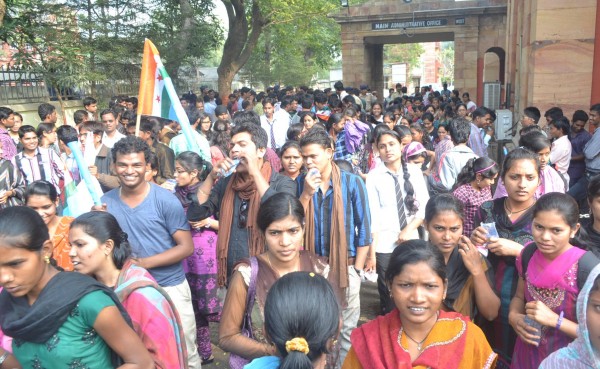 Nagpur News: Sunday the January 19 turned the Rashtrasant Tukdoji Maharaj Nagpur University (RTMNU) premises a battlefield with hundreds of students demanding they be allowed to appear for examinations. At the same time, RTMNU’s Vidvat Parishad was holding its crucial meeting in the afternoon. The gathered students started shouting high-pitched slogans thereby raising their demands. However, the premises took the shape of a war-zone in the evening when the mob of students, outraged by no communication at all by the concerned RTMNU officials with them, resorted to violence and started damaging the property during the ongoing Vidvat Parishad meeting. The students were led by the National Students’ Union of India (NSUI).

The RTMNU authorities, after witnessing the volcanic mood of the students, deployed police in large number in order to control the students and the damage to property as well.

The red faces of hundreds of students, being deprived of appearance in the examinations, were clearly visible as the situation was getting hotter and hotter with every passing minute. In the afternoon, seven delegations of the students were separately called to put up their demands before the RTMNU authorities. But till evening, no discussions were at all held with the delegations. The owners/directors of the colleges were also present at the RTMNU during the demonstration by the students.Police were also deployed by the RTMNU authorities. 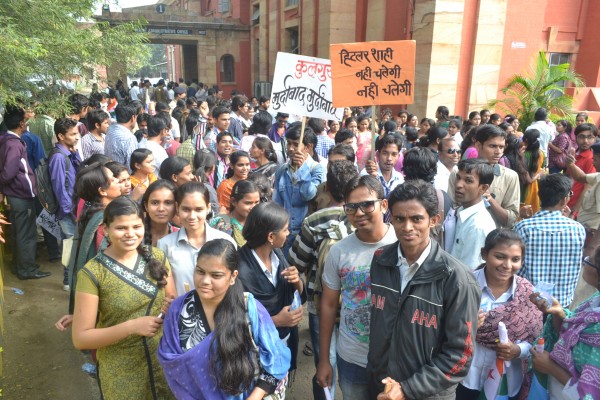 It may be recalled, the RTMNU had blacklisted 250 colleges having not a single regular teacher as a fall out of a petition filed in the Nagpur Bench of Bombay High Court against these colleges. The University then issued the list of such colleges and subsequently barred the First Year admissions for the academic year 2013-14 in these colleges. However, some colleges admitted students despite the ban believing the ban would be lifted after some time. But the issue is in the High Court for its consideration. 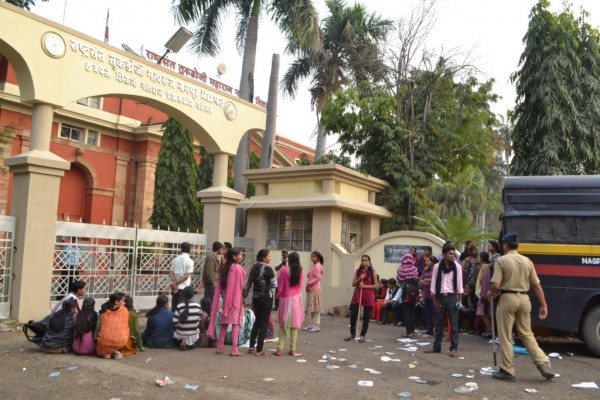 Since the issue is in Court, the RTMNU did not accept the examination forms of the students who had taken admissions in such colleges and thereby disallowed them to appear in the examinations. The frustrated students first raised their voice against their respective colleges for misguiding them and recovering fees. Today, hundreds of students reached the RTMNU for justice as they are on the verge of losing an academic year. And the mishandling of the situation on the part of RTMNU authorities resulted in violence and damage to property of the University. The Sitabuldi police were called for controlling the situation.