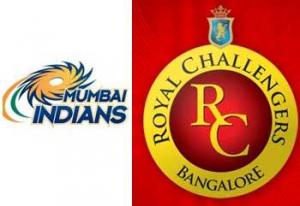 After the Kolkata boated the minus Sehwag Delhi team wits the time for some more action with equal reaction. Its clash of the titans today, both sides are strong, prepared and would like to take the anger out on the field . Mumbai and Bangalore clash in their opening match of the Indian Premier League in Bangalore on Thursday. Mumbai are the big-spending side and have the World T20 Trophy to show for all the money shelled out on acquiring star players. Besides, Mumbai have also been runners-up once and semifinalists twice in the previous Indian T20 League seasons. With Ricky Ponting as captain this time, Mumbai would be hoping to lay their hands on the IPL trophy for the first time. However Malinga will miss the tournament opener as he is nursing a sore back. In his absence there is lot to choose from the international basket given the presence of ‘million dollar buy’ Glen Maxwell, Dwayne Smith, Kieron Pollard, Jacob Oram and James Franklin.

Bangalore, on the other hand, will take the field with the young and feisty Virat Kohli leading the team. Known for being diffident in the initial stages of the IPL, Bangalore have in their arsenal, swashbuckling characters like Chris Gayle, Tillakaratne Dilshan and AB de Villiers, who can turn the game on its head in a jiffy. AB de Villiers though will miss the initial couple of matches as he is contracted to play for his home based franchise, Titans in the South African domestic T20 tournament. Kohli is not too far behind having been Bangalore’s leading run-getter (1639), but their over-dependence on Gayle has been a nightmare for the team. The West Indian, with 1341 runs, has won countless games single-handedly, but still has to come up good in big matches.

So catch the action live on your TV sets, as in this IPL, Sirf dekhne ka nahi!!!!