The Partition of Indian & Pakistan in the year 1947 is one of most gruesome acts in Indian History which affected all the facets of society. And stage always being a potent medium to convey the social plight, few talented playwrights has successfully portrayed them through their plays since India’s independence. Some are the adaptation from Novels where protagonist’s life seems to be majorly impacted by aftermath and some taking Partition itself as a central theme.

Producers Raja Chaudhary and Bhagirati Powdel with Shiv Bhagirathi Films Production and Akshra Groups Creation’s launched their new play based on ATMJIT’s ‘Rishtian Da Kee Rakhiye Na’, Hindi play under the title ‘Toba Tek Singh’. Raja Chaudhary and Bhagirati Powdel who have produced and acted in the play, draws its material from real life incidents and tales told by elderly relatives who had been through the trauma of the times portraying the suffering of the people who had to undertake arduous journeys, most often, away from their homeland, to another country and milieu. The play based on the lead protagonist – Toba Tek Singh, revolves around his life, how he recollects and shares his experiences with his fellow prisoners in Lahore jail. Nepali actor Bhagirati Powdel will be seen opposite Raja in the play. 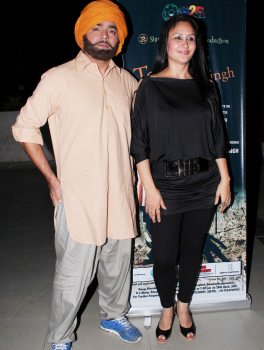 The controversial actor Raja Chaudhary, who made headlines for his brawls and marital trouble with Shweta Tiwari, was banned from entering Mumbai by law. But even then Chaudhary wasn’t sitting idle if you may think. The blessing in disguise came for him in the form of a film ‘Daal Mein Kuch Kaala’ with Pakistani starlet Veena Malik and he was also seen in Sunil Agnihotri’s popular costume drama ‘Chandrakanta’. But now things have changed for the better and with the play Toba Tek Singh, Raja is looking forward to start a new inning. “I’m very happy to be back to the place where I belong to – Mumbai. Now I just want to focus on my work. The play which I’m doing has shaped up well. I really hope people will like it since it’s based on India-Pakistan partition.

Bhagirati said, “I’m very glad to play one of the lead roles in Toba Tek Singh. Raja Chaudhary is a talented artist and we hope the play conveys the message to the people and the intention with what it has been created.” The play is a tribute to writer Saadat Hasan Manto on his birth anniversary. The Hindi adaptation is done by Saurabh Bhardwaj and directed by B.P.Singh.