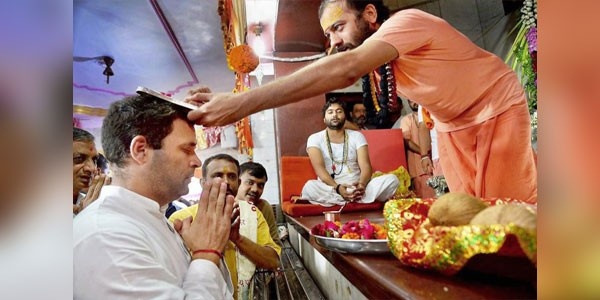 Addressing a function at Chhibramau, Adityanath said, “The Congress president remembers temples only during the elections. Four generations of Rahul’s family have never wore a ‘janeu’ (sacred thread worn by Hindus), but at the time of elections, he shows his janeu.”

“The four generations of Rahul Gandhi have never moved a step towards a temple. One should visit a temple with a feeling of devotion and not for politics or to show off,” the chief minister added.

The UP chief minister also accused Gandhi and other Congress leaders of trying to demotivate the Indian Army by questioning its bonafide acts.

“When the army guns down the terrorists, Rahul Gandhi and other Congress leaders raise questions against the Army. The BJP government at the Centre is trying to eliminate the menace of terrorism from the roots and also address the problem of separatism, which has made the Congress worried,” he said.

“We have moved ahead in politics through sheer struggle. Rahul behaves like an yuvraj, while we see politics as a medium of service,” he said.