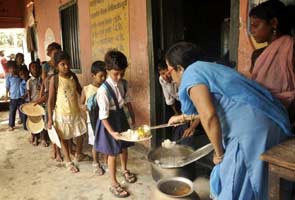 The Government-run Mid-Day Meal Scheme has gone full of “protein” and “iron.” Literally!!

The Tuesday the 13th picture in an NMC school turned chaotic as three students, it appears, were treated like a special species when the Mid-Day Meal was served to them. Two students found additional “protein” in the form of live woodworms, and the other student found “iron” in the shape of a nail. All three students complained to the teachers in this connection. However, even before the teachers could utter a word or act, the school went abuzz as the NMC’s Women and Children Welfare Committee Chairperson Chetana Tank and the Education Committee Chairperson Ashwini Jichkar gate-crashed for a surprise inspection. The school was Vivekanand Nagar Hindi Higher Secondary School of NMC.

The students, studying in Standard VII of the school, Bindu Gandhare, Meera Verma found the live woodworm in the meals, and, Deepak Koushik got the taste of iron, a nail. All three student complained to the teachers. The Tuesday meal menu was “Vatana ki Sabzi” (White peas vegetable) and rice.

The Headmaster of the School said, “After receiving complaints from the students, the food supplier was put on notice twice. Similarly, a complaint to the NMC Education Officer was lodged but no positive action was taken, the Headmaster said.

STRICT ACTION ON THE ANVIL:

The NMC’s Education Committee Chairperson Ashwini Jichkar said, the Headmaster committed a serious mistake by not tasting the food first himself before serving it to the students. She had inspected 6 schools in one month and has found incident first of its kind, JIchkar said.

On the other hand, the Head of the Group Varsha Hadke said, she is serving food to the school since 2004. Till now there was no problem. This is the first incident. The hygiene and cleanliness is maintained while cooking the food, Hadke clarified.