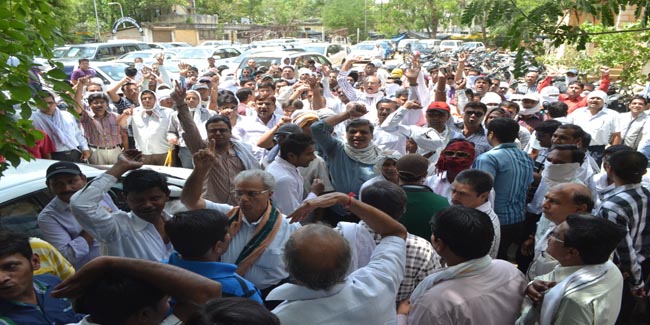 Nagpur News: The General Body Meeting of Nagpur Municipal Corporation (NMC) witnessed a fiery uproar over drinking water supply issue with the Ruling Party (BJP) Corporators and the Opposition Congress Corporators exchanging hot words against each other over the issue. The Orange City Water (OCW) Company was on the radars of Congress Corporators, and, became target, too, in the meeting held at Shreemant Raje Raghojirao Bhosle Nagarbhavan.

The meeting was to discuss many issues but the Ruling Party and the Opposition Corporators as well met the Mayor Anil Sole and demanded a discussion over burning water shortage issue and find a solution to the crucial issue being faced by several localities of Nagpur. The Mayor, too, set aside other issues and agreed to hold discussion on the water issue first.

The meeting, slated to begin at 11 am, was adjourned twice as the required number of quorum was not present. The late latif Corporators, who appeared insensitive towards people’s problems reached the meeting venue 1.30 hours late.

The discussion over dismal water supply issue was initiated by BSP Corporator Kishore Gajbhiye who slammed both Congress and BJP. Congress, he said, always talked of severe protest and walkout over the burning water supply issue. On the other hand, the BJP, Gajbhiye said promised governance of problem-frees-supply of water. Both the parties are misleading the citizens as both have failed in smooth supply of water to people in several areas. Gajbhiye also charged OCW authorities with functioning with irresponsibility that could be witnessed every year. He claimed, for at least 2-3 months every year there is chaos in water supply and many areas are starved of water. However, the irresponsible authorities go scot free, Gajbhiye lamented. The Ruling Party will feel the heat of this folly in the next elections, he warned. He demanded resignation of Mayor Anil Sole for fumbling on all water supply related issues including contact to NECL for water supply. The contract given OCW should be immediately cancelled and NMC itself should handle the crucial water supply issue.

The Congress Corporator from Zingabai Takli Arun Daware said that his Ward area occupies the one third population of West Nagpur Assembly constituency. There is large quantity of coal beneath the land in the undeveloped areas in his Ward, and, at least a dozen houses are being constructed in the areas. During summer, the areas become non-networking, and, the coal in huge quantity beneath the lands draw water from the grounds thus creating water shortage in gigantic way. The insensitive Water Works Department chief adds more woes to the residents of the areas, he claimed. The present chief is handling an additional charge and failing in both responsibilities causing untold hardships to the residents of these areas. Similarly, the work of proposed water tank at Gorewada should be undertaken immediately, Daware demanded.

Another Congress Corporator Abha Pande said the Water Supply Department provides answers to the issues to be raised just before beginning of the meeting leaving little scope to read the answers and pick shortcomings in the answers. Therefore, the answers to the questions to be raised should be given a day before and that to be in hard copy than the CD. And if the NMC Administration finds it easy to make CD then the NMC should provide the Corporators with laptops or computers so that the answers provided them could be read much earlier the meeting begins.