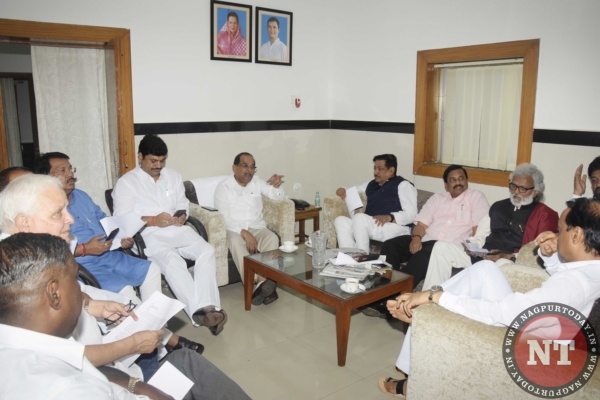 NAGPUR: The Congress and the NCP today on Tuesday boycotted the customary tea party hosted by Maharashtra Chief Minister Devendra Fadnavis on the eve of the monsoon session of the state legislature here, accusing the BJP-led government of shirking its responsibilities toward people.

Nagpur is hosting the monsoon session of the state legislature after a gap of 47 years.

The second capital of Maharashtra traditionally hosts the winter session of the legislature in December every year whereas the budget and monsoon sessions are held in Mumbai.

“The opposition is boycotting the tea party being hosted by Chief Minister Devendra Fadnavis because we believe that the government had failed to keep its promises made to the people and failed to fulfill its responsibilities,” Leader of Opposition in Legislative Assembly Radhakrishna Vikhe Patil told reporters.

He said, “the expiry date of the state government is nearing, which is likely to be before October 2019”.

It is known that the term of the Fadnavis-led government ends in October 2019.

Addressing a press conference, Vikhe Patil said the government has disbursed only 18 per cent of the crop loan so far for the Kharif sowing.

Vikhe Patil said, “whether it is suicide by farmers or corruption charges levelled against ministers, the government is always quick to give itself a clean chit”.

Describing the Navi Mumbai “land scam” as serious, the senior Congress leader said the needle of suspicion is pointing towards the chief minister.

Senior Congress leaders had yesterday alleged that the state government land in Navi Mumbai worth Rs 1,767 crore was given to a private builder for just Rs 3.60 crore with the “blessings” of the chief minister.

Vikhe Patil criticised the government over the partial collapse of a Road Overbridge (ROB) on the tracks near suburban Andheri railway station in Mumbai today.

“The government had not learnt any lessons from the last year’s Elphistpone Road incident. We were told that the audit of all the foot overbridges would be done. However, it seems that as the days of the government are numbered, they are busy doing their own financial audit,” the Congress leader said.

Addressing reporters, Leader of Opposition in the Legislative Council Dhananjay Munde questionned the need for holding the monsoon session in Nagpur instead of Mumbai.

“Why this tradition was broken this time? Had the government provided farmers the relief in the form of crop loan for Kharif season we would have had no problem with the monsoon session being held in Nagpur. We should know the real reason behind holding the session here,” he said.

Munde said the farmers whose crops got damaged due to pink bollworm infestation last year are yet to receive the compensation promised by the government.

The NCP leader also questionned the “silence” of the chief minister on the last month’s incident wherein a manager of a PSU bank in Buldhana district had allegedly sought sexual favours from a farmer’s wife seeking crop loan.

“There have been incidents of sexual favours being sought from wives of farmers in lieu of loan.. Why is the CM silent on this?, he asked.

Munde also attacked the state government over the proposed Nanar refinery project in coastal Konkan region of the state.

“The Armaco company with whom an MoU has been signed for developing the Nanar refinery had earlier approached Indonesia which rejected their proposal since it is not in the interest of that country. Why is the BJP hell bent on this project? The BJP and the Shiv Sena (a constituent of the coalition government and an NDA member) have betrayed the people of Konkan,” he said.

Munde said the Opposition would “expose” the faulty loan waiver granted by the government to farmers in the monsoon session.

He also criticised the CM, who holds Home portfolio, for “rising crime” in his home town Nagpur and other parts of the state.

“The Dhule lynching is another example of deteriorating law and order in the state,” he said.

The Opposition leaders said the Mumbai Development Plan (DP) is a “plan to disaster, as it is in favour of builders and not common citizens”.