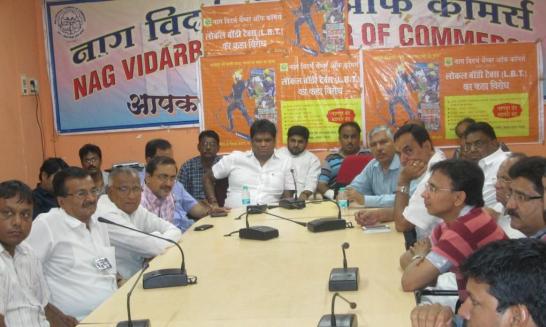 NVCC condemns half-truth being brought forward by NMC before the people. Shri Mahesh Dhamecha, Assistant Commissioner has stated to media persons that LBT is beneficial for people & traders. In this regard, we would like to put forth following questions to NMC to reply openly in public.

Even otherwise such dealers who are non-importers were not paying any Octroi, so instead of relief, actually LBT is going to cover such non importer dealer under its gambit.

We therefore request the Government & NMC to introspect in matter of LBT. Our Chief Minister has time & again stated that the Tax is being paid by customers then why are traders opposing the same? We have also  time & again stated that the traders are providing gratuitous services of Indirect Tax collection from citizens & depositing the same to Government treasuery & therefore the number of such indirect taxes has to be limited. In LBT the compliance cost of the Act & Rules to traders is much high then the actual implication of Tax. We urge the Government to realize the same & take necessary steps to collect the required tax from the existing indirect tax structure of VAT or else collect it directly from the citizens as some direct tax without involving the trading community.

Today a meeting of various trade organisations was convened at NVCC. During the meeting it was resolved to stage a dharna at Samvidhan Square. Thereafter more than 3000 traders walked in from NVCC office to Samvidhan square and organised a dharna in front of Dr. Babasaheb Ambedkar statue. There the gathering of traders was addressed by Shri Dipen Agrawal & Shri Radheshyamji Sarda President & Past president of NVCC respectively.  Ramdhun and National Anthem was sung to awaken the Government of Maharashtra from its deep slumber and to give them wisdom to withdraw LBT immediately. The Traders  took oath to continue their shops closed and continue the peaceful agitation against LBT till it is abolished from the state.

States in a press note issued by Shri Hemant Gandhi, Secretary of the Chamber.