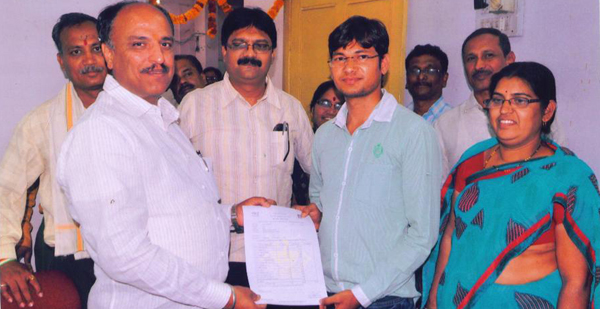 The Nagpur citizens, who are a harassed and frustrated lot by the prolonged battle by traders, businessmen, industries and other affected establishments over the crucial Local Body Tax (LBT) notwithstanding the pros and cons of it, have a good news and a sort of relief. The Nagpur Municipal Corporation (NMC) has armed its Zonal offices with e-governance system.

The Standing Committee Chairman of NMC, who is totally different personality in comparison with earlier Chairmen of the Committee known for their “haphazard” working styles and ruled the NMC according to their whims and fancy. Some previous Chairmen finished Standing Committee meetings within minutes and indulged in fiddling records.

However, this time, the NMC has got a computer expert, which is a total necessity in today’s  techno savvy situation, and who believes in providing more and more facilities to Nagpur citizens.  The computer expert is known as Avinash Thakre, who is the present Chairman of NMC’s Standing Committee and, who talks less and acts more. And the outcome of such personality is the e-governance system adopted by the NMC.

The computerized Dhantoli Zone with e-governance system was inaugurated by Mayor Anil Sole on Friday (May 9). Standing Committee Chairman Avinash Thakre was himself present on the occasion and others who were prominently present included Zone Chairman Lata Yadav, Corporator Sumitra Jadhav, Manoj Sable, and Assistant Commissioner Mahesh Morone and others.

Avinash Thakre informed media during the press conference about the lacuna faced by the NMC on Property Tax. Previously, the entries of Property Tax were made into receipt books and the disturbing outcome of this process was that the posting of these entries was not brought on records. This lacuna resulted in adding the paid tax bill amounts with the new bills of Property Tax thus putting the citizens in enormous difficulty, and they had run from pillar to post to correct the bills. This problem also created the chances of corruption as the harassed citizens always wanted to get rid of this lacuna by any means, stated Thakre.

However, this lacuna has been “killed” successfully by the e-governance system launched by the NMC. Now, the citizens would be provided demand notes for the next year as soon as they pay the Property Tax bill amounts Online. The valuation would also be carried out with the respective zones. The NMC’s headquarters would, too, receive the figures of Property Tax through the software installed at the zones. The process to make all the zones Online has been going on fast and would be completed on or before May 15 or at least before the month end, Thakre asserted.

Thakre proudly said that the Property Tax payers can pay the tax on credit cards, too, and from their sweet homes Online courtesy NMC’s e-governance.