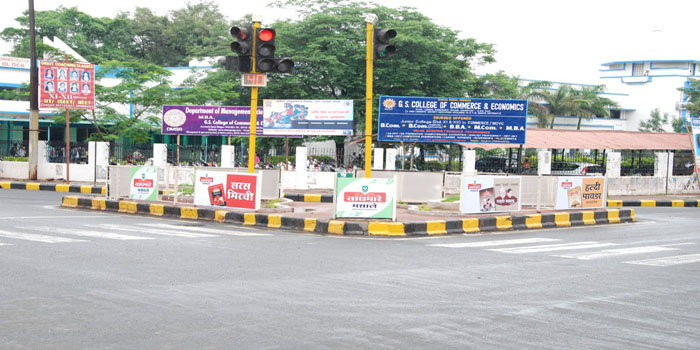 Nagpur News : The crucial issue of work order to erect advertising hoardings was raised vociferously by a senior Corporator belonging to the ruling party as directed by a Congress MLA. The Corporator had demanded that the work order previously given to the ad agency, the Mirage, without any delay and without putting any hurdle should be allotted the work order. The Corporator knew that which office-bearer and a top official of NMC would get “benefits” by giving the work order to the other ad agency than the Mirage. The Corporator,assuming that he may be “robbed” of great benefits if the Mirage ad agency is not given work order of erecting hoardings at important squares in Nagpur city, he made efforts to meddle in the process, thus drawing the wrath of the ruling party. Another reason for becoming the target of other Corporators of his party is assumed as he did not belong to their group.

Now, the Corporator informed the Nagpur Today that finally an order to allot the work of erecting the hoardings by the tender process only has been given to concerned authorities However, it has not been clarified that the first work order was given by the tender or the First Finder system. If the earlier work order was allotted by tender process then the tender should be honored or fresh tenders should be floated for the same, the Corporator said.

It may be mentioned that a new “fashion” has been adopted by the Ruling Party office-bearers and Corporators now-a-days that instead of “commission” they demand partnership any work, small or big, carried out by the firms of contractors or other concerned companies notwithstanding which political parties the contractors or the companies have been associated. The outcome of this latest “fashion” is that the senior ruling party Corporators have been put into a great dilemma.

The First Finder System in NMC has been controversial since it came into being. For this reason few former NMC Commissioners have revoked the system in Nagpur. But, sources revealed that the present Commissioner Shyam Wardhane  has made his intentions clear to bring it back. The file has not reached to the Commissioner but sensing the uproar, Wardhane reportedly has put the process on hold till the matter gets cooled down. Then as per the planned strategy work orders would be issued.

Insiders informed Nagpur Today that a former zone chairman of NMC along with his associate advertising agency Mirage had placed the proposal under First Finder System before the then NMC chief Sanjeev Jaiswal. As per the proposal, it was offered to install hoarding stands on maximum number of squares and high visibility spots on BOT basis. The chairman assured good revenue for NMC while ascertaining ‘heavy incomings’ on his part.

On the contrary, Jaiswal threw aside their plans and wished for taking out tenders for the same. Consequently, the contract went to another ad agency Sell Ads. Interestingly, NMC has not yet provided permission to Sell Ads to commence the work.

Insiders alleged that the former zone chairman has now offered to get the work order to Mirage in return for kickbacks that run in lakhs of rupees. It is being alleged that due to the same reason the Commissioner has been lured into blocking the process to issue work order to Sell Ads.

Mirage has also been allegedly asked to re-submit the proposal under First Finder System while the company which bagged the tender was made to deposit half the tender price. Highly placed sources informed that entire process is being secretly carried out. The chief accountant has already approved the proposal and the file with his signature reached Commissioner’s table.  Once the commissioner clears it, there would not be a problem to get it approved by the Standing Committee.

Sources hint at another scam is in the making for this tender allocation process in the name of First Finder System.