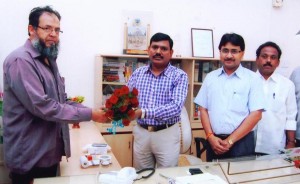 “Everyone will not get everything”. This is the way of life. But the Nagpur Municipal Corporation’s (NMC) Additional Commissioner Hemant Pawar thinks otherwise. He has demanded his transfer from NMC on the ground that he has not been allotted work of his choice. Whimsical!! Just to say!!

It may be mentioned that Pawar has been in the headlines for one or other controversies from the Day One when he joined NMC. Fed up with a horde of complaints from public for resolving their problems he has failed to get on the terms and condition of working in the NMC. He even discussed his desperation with some of old colleagues. He made his intention for transfer before Holi festival. Now, Pawar is hoping for his transfer to other office of his choice when regular transfers take place. He has shared this to one of his close friends.

Maharashtra Government in March promoted 32 senior officers as promotee IAS officers. But Pawar did not find his name in the list. Now, the question is on what ground Pawar was given the post only reserved for an IAS officer.? If anybody visits NMC office one can see a huge mob of contractors lined up to meet him for obvious reasons.

RAUT TO FACE ACTION?: Nehru Nagar Zone Ward Officer Harish Raut, who allegedly demanded bribe is likely to face action. Medical Zone Corporator Guddu Tiwari had lodged a complaint against  Raut wherein he stated that Raut demanded bribe for reducing property tax. However, Pawar has asserted that Tiwari has failed to give any concrete proof on Raut’s demand for bribe. Tiwari has also lodged a complaint stating Raut has misused his post and powers for some benefits. This complaint may put Raut in a spot since Tiwari is mounting pressure and also said that he would approach courts if higher authorities failed to take action against Raut.