Chetan Bhagat, Prabhu Chawla, Diana Hayden and many other prominent personalities from various fields to grace the function

Nagpur News: A first ever National student parliament is going to be conducted by  Raisoni Group of institutions on January 28-29, 2014 at its Hingna Campus.

Speaking with the media  Dr Ravi Ahir of  Raisoni Group said  that the main goal of the Mega National student parliament is to provide and share a common platform to the young leaders who are dynamic, vibrant and change agents so that they can rise above the present system and strife for bringing about change. 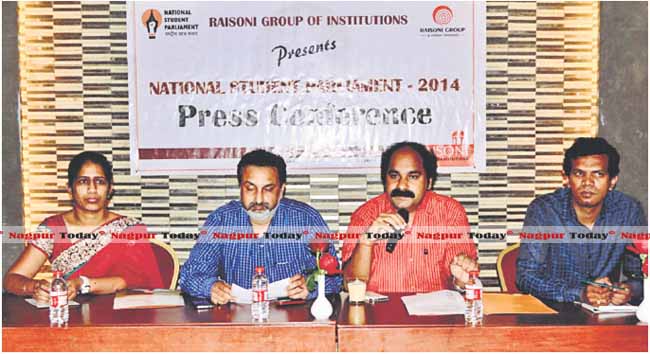 The 2 day program is divided into six themes-what Young India wants, India at 20-20,fighting crime against women, Social Media Boon or Bane, Indian Education System, Indian Education system and Indian Politics scams & Corruption. All the sessions will be chaired by some Vice Chancellors and a media person will conclude the sessions.

Total 1000 students are expected to attend the program. Out of which 250 of them from various parts of country. 53 colleges from Maharashtra have confirmed their participation.

Dr.Ravi Ahir further elaborated selected students will also get opportunity to give their perspective on the stage. A white paper will also be made on the conclusions of  the topic discussed during the conference. This white paper will be sent to respective Government Ministries.