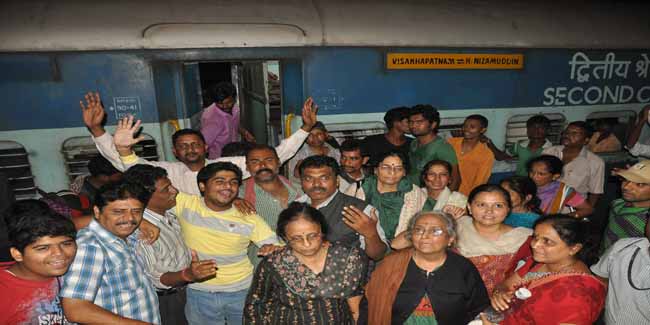 Nagpur News: The worst ever floods and cloudburst in Uttarakhand has caused more damage than one can imagine. The apathy of the rescue operations was evident from the sorry tale that many from Nagpur who landed safely to the city out of the worst watery havoc, also termed as ‘Himalayan Tsunami’, narrated about the situation.

Yesterday, 12 out of 65 pilgrims from Nagpur who had visited the affected state for Chardham Yatra heaved a sigh of relief as they reached their city after travelling all along into the general bogies of the train. Sanjay Deshpande, Director of Tirupati Tours and Travels which conducted this tour informed that they remained stranded in Vyasi, Devprayag, Badrinath and Govindghat from June 15 to June 18. There were torrential rains, landslides and rock slides everywhere.

Meanwhile, more than 150 people from Nagpur were still trapped in the affected areas. The district collector office issued the list of 72 pilgrims whereas the information received from various travel agencies put the number of citizens from Nagpur to over 150. However the state government has established help centers at Dehradun and Haridwar but that seemed not suffice to attend to the crisis.

If Sumit of Nagpur is to be believed, his family members came all the way from Nagpur after hearing of the tragedy and ran from pillar to post to get his and the other 48 members of the group evacuated from Dharali near Gangotri. But he refused, after which they got in touch with the Maharashtra chief minister, who got in touch with his Uttarakhand counterpart.

Sumit claims the family spent Rs 20 lakhs for a private chopper to ferry them to safety, and that only permission for flying the chopper was given by Uttarakhand government and nothing done despite the fact that they were without food and just sipping lapfuls of water to survive. Needless to say, that all could be seen in tears when they reached Dehradun.

No denying the fact that in a tragedy of such mammoth proportions, where over 70,000 people have been stranded and an infinitely large number of people killed and property worth thousands of crores devastated, it is quite an herculean task to look into the needs of every single individual, but if the reports that are filtering into the state headquarters is any indication, there is complete chaos.

While the district magistrates of the affected districts are claiming that they have enough food packets to be distributed, those stranded in the far flung interiors are crying for food and water, claiming that they have not a morsel ever since the rains devastated the region, about six days back. They look skywards at the choppers in hope that food will be dropped, but are left disappointed.

In the control room which is supposed to be manned 24X7 there is complete chaos. The information is not being updated and it is not known who is stranded where and even whether groups of people are alive or not. The large number of people, who have come here from all parts of the country to know the fate of their immediate family members are getting no response from the control rooms, for the simple fact that they do not have the information.

Perhaps knowing that there would be complete chaos, because of the sheer magnitude of the tragedy, certain states decided to send their own ministers and officers to open helplines for people of their states. West Bengal, Maharashtra, Andhra Pradesh and Rajasthan are some of the states that have set up their helplines.