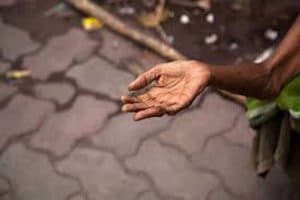 Nagpur: Mystery shrouded deaths of a woman and a man, whose bodies were found near Chhatrapati Square and Sonegaon Lake respectively within the last 24 hours. The two were living together and used to beg on the street near Sai Mandir. The cops are suspecting that the two might have died due to over consumption of sanitizer.

After the body of Suman Vinayakand Nandpatel (45) was discovered near Chhatrapati Square, her living partner Deepak Bhagwan Gohane (50) was found dead near Ganpati Mandir at Sonegaon Lake on Wednesday morning. Police questioned beggars in the area and got information that the two used to consume sanitizer.

Suman was found dead on Tuesday morning while Deepak’s body was discovered by passersby on Wednesday. He went missing on Tuesday after Suman was found dead by the police. Prima facie, the cops are suspecting that the two might have died due to over consumption of sanitizer. However, the cops are yet to conclude the theory of Suman’s death as she was found in semi-naked condition. As both bodies are found within 24 hours, the cops are trying to ascertain the ‘missing link’ of the deaths. The police have registered a case of accidental death and sent the body of Deepak for post-mortem.