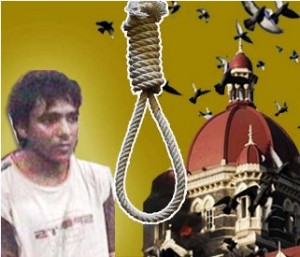 In a top-secret operation, Pakistan national Mohammed Ajmal Amir Kasab was hanged in the high-security Yerwada Jail in Pune early on Wednesday after a four-year-long trial. Kasab, who was being kept at the Arthur Road Jail in Mumbai, was moved to the Yerwada jail earlier on Sunday night.

The lone surviving gunman in the Mumbai attack of November 26, 2008 was shifted to the Yerwada Jail following the rejection of his mercy petition by the President earlier on November 5.

In a formal announcement made by Maharashtra home minister early at 8:30 am on Wednesday, RR Patil said, “Kasab’s hanging is a tribute to all the 166 people killed as well as those police officer martyred in the attack.”

“Today, 7:30AM, Ajmal Kasab was hanged in the Uerwada prison,” confirmed Union home minister Sushilkumar Shinde. “Of the 10 people who attacked Mumbai, one was arrested alive. Just as I landed from the Interpol meeting in Rome on November 5, the mercy petition lay before me. We had recommended that his mercy petition be rejected. Later, it was rejected by the President on November 7, and the file sent to the Maharashtra government on November 8. Following this, the date of November 21 was set for the hanging.”

When asked if a death warrant was issued, Shinde said in the negative. In fact, the process leading up to execution was kept unusually top secret in a bid to avoid political wranglings over the hanging issue.

“The secrecy was necessary as it was a high-profile operation. The Pakistani high commission was informed of the decision to hang Kasab by letter, phone and fax, but it was ignored,” added Shinde.

The bodies of all the other bodies of the terrorists killed in the Mumbai attack were buried in India after Pakistan refused to claim them.

Kasab was filmed walking through Mumbai’s main train station carrying an AK-47 assault rifle and a knapsack on his back. India accuses Pakistan-based militants of organising the Mumbai attacks, saying Islamabad is failing to act against those behind the raids. Pakistan, however, denies involvement and says it is prosecuting seven suspected militants for their role.

It may be recalled that the visit by the Pakistan interior minister Rehman Mallik due to begin on November 22, was cancelled at the last minute as India did not want to host a Pakistani delegation at the time of the execution which was pre-decided soon after the President rejecting Kasab’s mercy plea.

Once a mercy plea is rejected by the President, the case goes back to the trial court, which then takes into account the Supreme Court upholding its death sentence order. The trial court then sets up a date for the hanging. However, in this case, the decision may been taken on the prison officer’s level itself, thus opening a debate on the issue.

Sentenced to death by the Bombay High Court in last October, Kasab was convicted on charges ranging from treason to waging war against India. His appeal in the Supreme Court was turned down in August.

“It is a warning for those trying to instigate terror attacks in India, as well as succour for those who have suffered due to these attacks,” said BJP vice-president Mukhtar Abbas Naqvi.
The hanging of the Mumbai attacker a day before the winter session of the Parliament is expected to provide a temporary succour to the government facing a no-confidence motion against it.