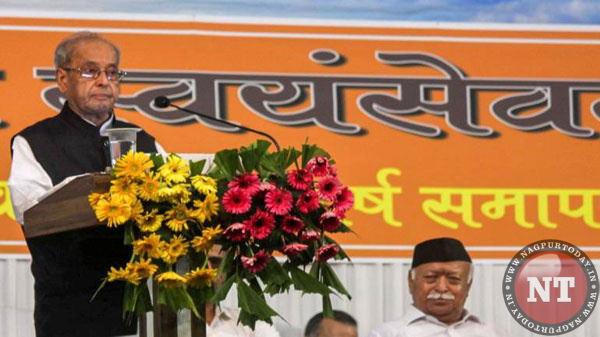 Nagpur: The RSS has said that former president Pranab Mukherjee, in his speech at the organisation headquarters here, reminded the glorious history of the nation while highlighting inclusiveness, pluralism and unity in diversity as foundation of India.

“Mukherjee’s address reminded the glorious history of the nation…5,000-year-old cultural heritage of the country. Our state system may have changed but our values remain the same. He also highlighted inclusiveness, pluralism and unity in diversity as foundation of Bharat,” RSS prachar pramukh (official spokesperson) Arun Kumar told PTI last night and thanked Mukherjee for attending the RSS meet.

“We thank for him coming to the event and strengthening the conversation around the concept of nation, nationalism and patriotism,” he said. Mukherjee yesterday warned that any attempt to define India through “religion, hatred, dogmas and intolerance” will dilute our existence and said public discourse must be freed of all forms of violence, as he addressed an RSS event despite criticism by the Congress and his family.