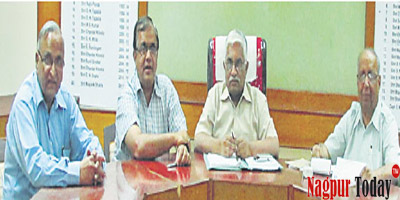 It has no direction and aim, as the general election is due in 2014, government does not want to antagonize common masses and at the same time can not appease them because of the huge fiscal deficit and the bleak future following global economic crisis and slow down. The members had a sigh of relief as there was no additional burden loaded on industrial fraternity.

Opening the discussion president Mayank Shukla felt that finance minister has successfully performed a balancing act while walking on the tight rope. “It is to be seen how much realistic and achievable efforts are made to arrest fiscal deficit to the level of 4.8 per cent of GDP and achieve a growth target of 6 per cent in the fiscal 2013-14. Numbers of welfare schemes are announced and fund allocations are enhanced in various schemes, but where are the required funds?, he asked. Even in the fiscal 2012-13, various welfare schemes like MGNREGS and PMGSY received much less than the proposed funds in the Budget.

Liquidity for MSME sector has been made available, but how about the raise in excise and service tax exemption limit? The present excise limit remains untouched for last seven years and service tax for four years, he said further.

Seretary MIA, Capt Randhir felt that the increase in allocation of HRD fund to ` 65,867 crore rupees will help the youth force to become a useful human resource and can contribute positively in the overall economic growth of our country.

Various welfare schemes for women empowerment and their security is a welcome step that can build confidence amongst the women folks of our society.

Treasurer Shekhar Bendre, lauded the skill development scheme for youths. Such schemes can not only mould the attitude and behavior of the youths but can create skilled manpower which is a need of manufacturing sector.

Creation of skilled manpower can contribute a lot to the nation’s economy. Momentum to infrastructure facility programme will attract foreign investors thereby improving the liquidity of funds, he further said.

Past president Chander Khosla said that tax credit to the tune of just ` 2,000 in direct tax for lower income group in the range of ` 2 lakh to ` 5 lakh is just a pea nut which is a cruel joke and cannot heal the heavy inflation wound. Offer by way of increase in standard deduction could have encouraged the savings.

Immediate past president D N Gupta said finance minister should have proposed some stimulus package to the industries struggling for survival in this era of economic slow down and crisis. Additional capital incentive to the tune of 15 per cent other than depreciation in case of expansion and new units above 100 crore will help only limited and large scale industries he further said.