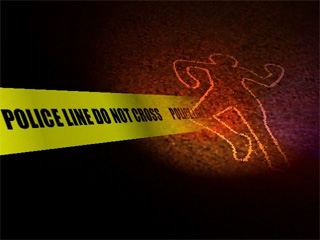 Nagpur News:  A man brutally murdered his wife and also tried to kill his 6-year old son in the Jaripatka Police Station jurisdiction. The accused has been identified as Santosh Somkunwar (40), a resident of Plot No. 127, Nanubhai Gajbhiye’s House, Kapil Nagar. Santosh slit the throat of wife Poonam  (36) Somkunwar with the help of a sickle generalyl used in cutting sugarcanes. He then tried to kill his 6-year old son, Manas, by strangulating him. However, Manas survived the strangulation as his father Santosh assumed Manas was dead. Santosh then tried to kill himself by consuming a sort of poison. Now, he is fighting for his life in the ICU of Mayo Hospital.

According to police sources, the reason behind the horrible murder seems suspicion of Santosh that Poonam had an illicit relation with other man. The alleged infidelity on Poonam’s part left Santosh so outraged that he in Satanic manner slit the throat of Poonam in front of his six-year old son. Santosh, not satisfied with wife’s murder, also tried to kill Manas but luckily he survived on assumption by Santoh that Manas was dead. The suspicion on Santosh’s part left the entire family destroyed. The action by Santosh worked heavily on his mind and he,too,  tried to commit suicide by consuming poison.

Poonam’s friend and her neighbour, Chitra Mukesh Dhawde, informed the Police Control Room by dialling 100 and in turn the Control Room informed Jaripatka Police Station. DCP Mangaldeep Seram, ACP Thorat and PI Barsadade  rushed to the spot and immediately started investigation into the matter. They first sent Poonam’s body for post-mortem to Mayo Hospital. The police recorded statements of Chitra Dhamde and other neighbours of Santosh Somkunwar. They have registered an offence against Santosh under sections 302, 307 of IPC. They will also book Santosh under relevant sections for trying to commit suicide if he stays alive.