Even as Aadhar Link for gas subsidy has been suspended in the recent announcement made by the central government, the consumers in Nagpur already linked are made to cough up the price of non-subsidized cylinders i.e. Rs 1260. The subsidy of Rs 750 is being deposited in the bank, making the net payable as Rs 510 against the actual price of Rs 465. Recently the central government while putting Aadhar link gas subsidy deposit scheme on hold had also extended subsidy quota from 9 to 12 cylinders per year, effective from April 2014.

The deficit in the subsidy deposit was being faced by hordes of customers who had linked their gas connection through Aadhar cards. The means that the consumers who are not linked yet are being provided subsidized cylinders directly at Rs 465 while those who got their connection promptly linked to the scheme are getting it at Rs 510 after deducting the subsidy deposited in the banks here.

The practice has been followed right since the start of the Aadhar linked subsidy deposit scheme. Initially the fixed amount of Rs 435 was deposited as advance subsidy followed by regular subsidy deposited after every refill till the quota exhausts. The anomaly was noticed by series of consumers who queued up at their respective gas agencies in vain.

At present there is a difference of Rs 35 between the price of subsidized cylinders delivered through Aadhar link and those provided directly.

Recently when the non-subsidized cylinder was priced at Rs 1365, the subsidy deposited was Rs 855, making the customers to cough up Rs 510 from their pockets. The difference has been consistently maintained and there is no respite in sight.

When Nagpur Today quizzed HP Regional Sales Officer Rahul Patre, he informed that VAT is levied on the subsidy deposited in the banks and hence the difference. A consumer has made series of complaints online at the website of Hindustan Petroleum and Patre had only replied that he was yet to receive solution to this problem from the higher authorities.

“I am just a small pawn in this mechanism and it is for the authorities to take final call on this matter. As a consumer I too understand the inconvenience being caused to Aadhar linked subscribers but I am helpless to initiate anything on my own”, Patre told Nagpur Today.

When Nagpur Today called up Rahul Patre to know the status update of this scheme, he did not respond to any of the calls.

An executive Kapil at HP Gas Agency, Jyotika at Khamla told though the cash transfer scheme has been suspended, nothing has been officially came to the agency and hence the scheme is being continued.

Meanwhile the consumers continued to suffer the heat of the paying up extra for the subsidized cylinders.“It seems we are being punished for acting so prompt on the central government’s call to link our gas connection through our bank accounts. Those who are getting it directly are being provided at Rs 465 only while we have to bear Rs 510 from our pocket against the subsidy deposit of Rs 750 only”, irked a consumer at Indane gas agency.

Another customer Ashok Shivhare said, “This is frustrating. There is no coordination between the gas distributors, companies and central government. I don’t know what’s cooking on. I believe some major scam is in the making – The Big Subsidy Scam.” 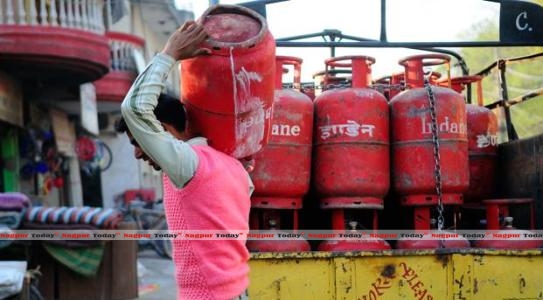