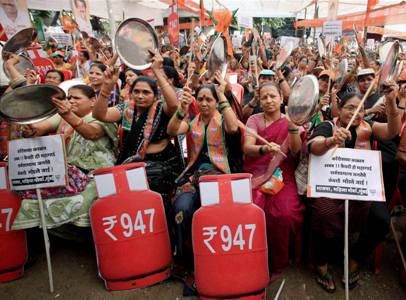 Nagpur News : As most of the families in Nagpur are approaching towards finishing their quota of subsidized LPG cylinders and the consumption increased with the onset of winter and ongoing festive preparation, the actual bomb of the price rise is about to explode anytime. Already facing the heat of inflation, the consumers, especially those under lower income groups, are seemingly worried about how they would manage to afford the non-subsidized price which is almost double the normal price of subsidized cylinder. In addition to it, a whole of confusion prevails among the city consumers over the related problems like filling up KYC forms and knowledge about the number of cylinders they would get. Even as the dealerships are flooded with regular consumer queries, they too do not have the real piece of information.

Anil Wankhede, a dealer with Indane, the LPG brand of Indian Oil opined that while knowing about the price hike would not have affected much, the real pinch is now all set to burn the pockets of consumers.  The consumers would now know what it feels to pay the double price of the commodity without which they cannot do, he said, adding that the consumers are even in dilemma regarding the actual number of cylinders and also the price. He stated that it was tough time ahead for the poor families.

Adding to the woes, the confusion over the number of cylinders to be divided into subsidized and non-subsidized still prevails in the wake of fast changing headlines regarding the issue.  Recently, the state cabinet announced to increase the number of subsidized domestic LPG cylinders to nine per year, but the relief would be extended to only those families whose annual income does not exceed Rs 1 lakh. Then, on Saturday the newspaper headlines read out the Congress supremo Sonia Gandhi directing the petroleum minister Veerappa Moily to consider giving out 12 subsidized cylinders per year. The fast turn of events has only added to the confusion rather than doing a bit in solving the problem. Last September, the union government has decided to cap the delivery of subsidized cylinder to only six per connection for one year. It was also directed to allot three at subsidized rates till the financial year ends March next year.

Consumers queuing up the dealers

With every decision that comes to the fore, the phones start ringing at all the dealers‘ office across the city, however,  the dealers remained stuck to single line answer that they have not received any circular in any regard except that only 3 subsidized cylinders have to be distributed till 31st March, 2013 and the extra cylinders consumed during this period would be charged at non-subsidized price of Rs 965.50 per cylinder. On condition of anonymity, one of the dealers with Bharat Gas said while consumers are running from pillar to post to get actual information, the companies are busy sharing the data to check for multiple connections under one name or multiple connections under different names but same address.

Rahul Patre, sales officer with Hindustan Petroleum (HP) seemed reluctant to comment when asked about the status of new connection. He however informed that the all the three companies – HP, Indian Oil and Bharat Petroleum are developing a software, which is in the finishing stage, to trace the erring consumers.  He pointed out the most of the families have taken multiple LPG connections of different companies in the name of different family members.  These connections are needed to be surrendered first. Till the time the process is done, issuing new connections have been stopped. He said that even if someone wanted new connection then he would have to pay the non-subsidized rates. Patre however failed to explain the difference being meted out the needy consumers looking for the new connection when the subsidy benefit is being given to all.

While a great deal of confusion persists among the consumers about how and who has to fill the KYC (Know Your Consumer) forms, Indane dealer Anil Wankhede has steered clear of the prevailing uncertainty. He clarified that while it is not binding for all to fill up the KYC forms, the document is actually meant for those having multiple connections under one name with different address and also under different names at one address.  He said that in most of the cases, the siblings reside at one house but their kitchens are separate, adding that in such cases, the consumers have to specify the floor of the house in which their connection is being operated.  The consumers can even download the form from the site of any of the companies and hand over the filled forms to the delivery vendor, he added.