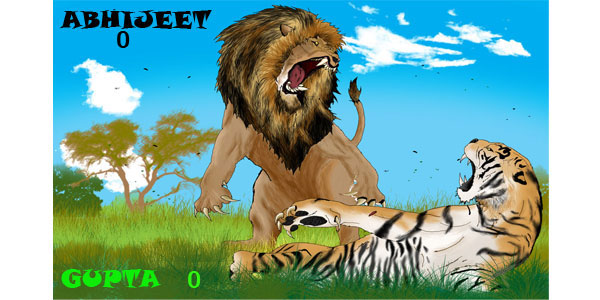 By playing a draw both the teams got one point each. The match would have gone  in favour of Abhijeet Lions had Owain Khan not been under the cross bar. He thwarted several goal scoring attempts of Abhijeet forwards. The first half was mostly dominated by Abhijeet Lions. On several occasions, they came close to score but missed the opportunities. In the 21st minute ,  Arif missed to score on rebound twice in goal mouth melee. In the 27th minute Abhijeet custodian Abdulla Ansari saved a  good attempt of Gupta foreign recruit Ozor.

Tabresh Junaidi was unlucky as his kick went above the cross bar in the 32nd minute. Abhijeet once again missed an opportunity this time Michel’s powerful kick from 30 yards dashed against the cross bar.

With just few minutes remaining, Gupta goalkeeper Owais Khan taking the risk stepped out and saved an attempt of   Jahid Akhter who was marching towards  top of the box area by  dribbling the ball.

In the second half also bad luck continued for Abhijeet Lions. Despite making several attempts, the success was elusive for them. Particularly Zahid Ansari was unlucky twice. First in the 58th minute his attempt on Sheikh Ansari’s pass was thwarted by Gupta defender Bojomo Emanuel. In the 82nd minute Abhijeet substitute Ahfaq Amir’s attempt rebounded from goal keeper’s hand but Zahid failed to capitalize on it.