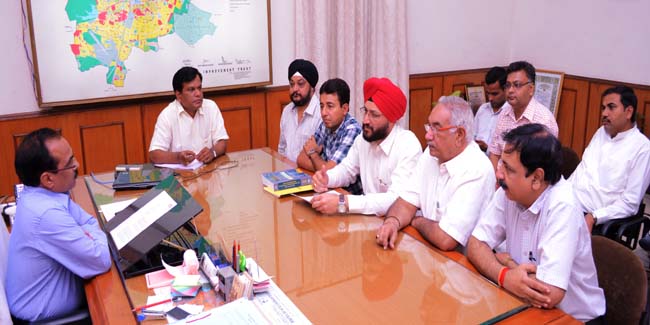 VTA also sent memorandum by registered post to Chief Minister Prithviraj Chavan and Principal Secretary – II Shreekant Singh, Urban Development Department (UDD), Mantralaya, Mumbai demanding immediate withdrawal of Gazette Notification dated 25.02.2013 by UDD for levy of LBT in lieu of Octroi within limits of Nagpur Municipal Corporation (NMC) from April 1, 2013 and demanding levy of octroi in its present form till the same is merged in GST, as & when implemented.

VTA declared this as absolute breach of trust by the State Government as in early 2000 when Maharashtra Value Added Tax (MVAT) was at proposal stage Government had assured traders that gradually Octroi would be completely withdrawn. In recent past Government declared that when Goods and Service Tax (GST) would be implemented Octroi would be merged therein and now with LBT being forcefully imposed.

Likewise notification dated 25.2.2013 directing imposition of LBT in lieu of Octroi in the City of Nagpur is contrary to the mandate of Section 149 of the Maharashtra Municipal Corporations (MMC) Act, 1949. As per Section 149 of the MMC Act, 1949, the Corporation has to first seek provisional approval of the State Government for making rules for imposition of a tax which falls in the categories enshrined U/s. 127(2) of the MMC Act. Notably, LBT can be levied by the Corporations U/s. 127(2)(aaa) of the MMC Act. After seeking provisional approval the corporation can make rules in respect of such a tax i.e. LBT and in present case NMC never proposed levy of LBT in lieu of octroi to the State Government.

That, the State Government has not yet determined the rates and the extent to which the LBT would be applied on different commodities by notification in official gazette as per Section 99C of the MMC Act, 1949. Notably, as per Section 99B thereof, every year the State Government after considering the proposals of the Commissioner of Corporation shall determine the rates and the extent to which the LBT shall be levied for various categories of goods in the next ensuing official year and shall notify the same in the official gazette. This exercise is to be done every year before 20th day of February and NMC had yet not finalized mandatory preparation and notification of Schedule ‘A’ and ‘B’ of such list.

That, as per Section 127(2)(f) of the MMC Act, 1949, the Corporation can levy any tax but not being a tax on professions, trades, callings and employments. However, if the LBT Rules, 2010 are carefully perused in consonance with the provisions of the MMC Act, 1949 then the same shall reveal that the incidence of taxation is changed thereby.

These LBT Rules, 2010 amount to double taxation, as if the incidence of taxation of the LBT is sale or purchase then even the incidence of Maharashtra Value Added Tax Act, 2002 is the same. Also, the financial years for the levy, collection and payment of LBT & VAT are one and the same. If the purpose of both LBT & VAT are scrutinized it shall become crystal clear that, every time the property changes hands and the value is added then LBT and VAT shall become payable thereon. Hence, it mounts to double taxation on the citizens for the same cause.

That, Rule No. 36(f) of the LBT Rules, 2010 is arbitrary and unreasonable as along with an appeal framed and filed U/s. 406(6) of the MMC Act, the appellant shall have to annex a challan for proof of having deposited the disputed amount of local body tax as required U/s. 406(1)(e) of the MMC Act. This condition of pre-deposit of entire amount of disputed LBT is highly unreasonable and arbitrary qua it leaves the appellant in no position to arrange funds for the same and thereby renders the appeal only illusory and not practical.

That, provisions under Rule 22(b) insist, that every registered dealer will have to mention name, address and LBT number of the purchaser on every invoice of Rs.500 or more. This clearly causes a hurdle in free trade and business does violating Article 19(1) (g) – Right to freedom of Trade and Business of Indian Constitution.

That, wherever the LBT is levied in other cities of the State of Maharashtra, the same has proved to be miserably unsuccessful. It was reported in one of the newspaper that, in Mayors conference held on 22.12.2012, many municipal corporations had themselves highlighted that they were facing severe financial crisis when Octroi was replaced by LBT. It was found therein that Amravati Municipal Corporation was not even able to pay salaries to its employees since last 4 months.

VTA submitted that is reliably learnt through newspapers that even after advent of LBT; NMC shall continue to levy Transit Pass (Rahadari). If that be so then this is contrary to the MMC Act & the LBT Rules, 2010.