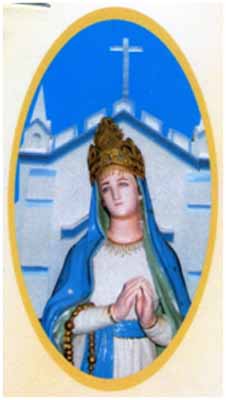 Nagpur News : The feast of  Lady of Lourdes  solemnly will be  celebrated on Sunday at the Lord Matha Grotto, Seminary Hills, Nagpur. To mark this occasion Holy Mass  will be observed in different regional languages in the morning followed by  healing prayer service in the afternoon with High Mass  service at 4 o’clock. The candle-light procession along with the statue of Mother Mary  will be followed after the Mass.

This Grotto of Mother Mary is named after  Lady of Lourdes. Lourdes is a place in France where Mother Mary appeared 18 times from February 11th, 1858 to a girl named Bernadette. On 11th February 1858, Marie Bernadette Soubirous, a fourteen year old French girl, along with her two companions, went to collect fire woods in the woods of her home town Lourdes on the northern slopes of the Pyrenees, France. When she was about to cross a small stream, she heard a rustling sound in the trees nearby, and when she looked up she saw a beautiful lady in a cave which was a natural cavity in the rock. This Lady was none other than Mother Mary herself. The lady in the cave invited her to pray. Bernadette knelt down and began to pray the rosary and the lady accompanied her over the five decades, and then, vanished. On 25th March, in another apparition, Bernadette asked about the identity of the Lady, and the lady in the cave said, “I am the Immaculate Conception”, thus confirming to the title already attributed to her by the church. Since then every year thousands of devotees make their pilgrimage to Lourdes, France. Many miracles take place and many people get healed who visit the place.

Our Orange City is blessed to have a grotto in the name of Our Lady of Lourdes. The Grotto of Our Lady of Lourdes is indeed a pilgrim center for all the believers and all those who come in faith to meet Mother Mary at the beautiful shrine at the Seminary Hills. The Grotto has a magnetic power because of the powerful presence of God and the innumerable prayers and petitions answered for the devotees of Mary. This shrine is more than 120 years old. Over the years the grotto has evolved to be what it is today.  Its feast is always celebrated on the second Sunday of February and many people participate without failure in the nine days novena prayer, and for the nine Saturdays novenas. Year after year the number of people participating in these celebrations continues to increase. For more than one hundred years these celebrations have been going on and now every year roughly two to three lakhs of people come to this shrine. People from Maharashtra, Madhya Pradesh, Chhatisgarh, Odisha and other states of the country flock towards the Grotto with full faith and devotion. Thousands of people are expected this year to join for the feast.