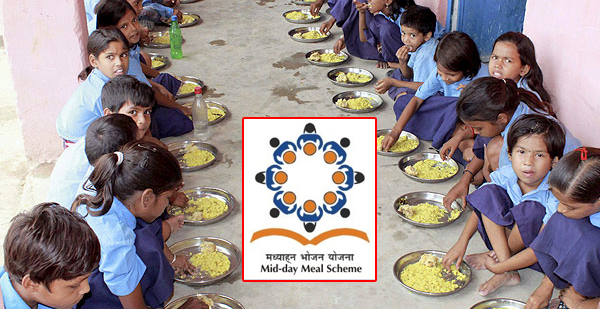 The scanner was taken aback after finding the Khichdi, served to students in East, West, North, South Nagpur’s  Government, aided, partially-aided and non-aided schools, worth throwing in gutters. And, truly, is being thrown in nallahs, gutters as almost all students silently refuse the unhealthy, unhygienic and, tasteless stuff being part of Government’s Mid-Day Meals scheme for poor students of the schools.

Nagpur News: If the Nagpur citizens desire to watch poorest of poor picture of Mid-Day Meal of the much hyped Government scheme in the Orange City, then Ready, Camera, Action: A school bell rings at 2 in the afternoon. Students coming out of classes hurriedly with plates or tiffins  in their fragile hands. The boys and the girls line up in their separate queues. All in military discipline. Then enters the “villainous” khichdi.  Khichdi? Citizens taken aback by the stuff called Khichdi! If Khichdi is like wet and only wet rice, spices for the sake of spices, no potatoes, a “lucky” finds a small piece of tomato, then the Khichdi gets a new definition!!!  The citizens ponder: What the stuff is called we eat as khichdi? No.  No. No. Something is wrong. Terribly wrong.

Don’t get upset Nagpur citizens. The picture you just was a trailer. The main picture is yet to begin. When the Nagpur citizens watch the same “Khichdi” situations prevailing in almost all schools in East, West, North, South Nagpur’s  Government, aided, partially-aided and non-aided schools, then only the picture will show The End. And beginning of hot talks, red-hot reactions, frustrations. Here there is no The End.

A hawk eye scanner just wanted to feel the situation of Mid-Day Meal scheme in many more schools. The scanner went to a school where the same “Tasty Khichdi” was being distributed to the students. At the very first sight, the students showed signs of mindful and stomach full reaction. Not to mention the Khichdi was deserted by some students, of course, silently and without noticing by the teachers or supervisors or cooks of the nauseating stuff. Some very very hungry students hurriedly swallowed the Khichdi just to fill the empty stomachs that too only half or less the served quantity and remaining stuff was either taken to homes or dumped on the streets to be eaten happily by the stray dogs.

The scanner, too, faced many difficulties as soon as the authorities of schools come to know that scanner is in their schools to watch the picture of the Mid-Day Meals. Some schools displayed halfhearted nods but with a mastery rider. No entry to food cooking places. Some schools refused the scanner the permission to shoot the scenes without which the picture would not be complete. Some schools with no worry at all welcomed the scanner wholeheartedly, served the food, this really the tasty, informed the entire process from cooking place to distribution of yummy food. These schools were religiously implementing the Mid-Day Meals scheme. So, nothing to worry.

RICE IS RICH WITH “VITAMIN MINUTE STONES, illy”: When the scanner approached the students for their experiences with the Mid-Day Meals in other schools, the students after watching no teacher or other staff is nearby, lamented, “We are fed with Khichdi with additional vitamins in the form of minute stones as the raw rice is not filtered, dead illy (nuggets), and other dirty vitamins. We bring plates from home and clean, wash. Dozens of students bring home-made food. They don’t eat the Khichdi. Some students and teachers take the food home. And if the food is cooked  in a large quantity, and is not consumed by students or others, the food is thrown into nallahs or any place.”

SHORTAGE OF CLEANERS: An employee in a Government schools said, the school is well short of cleaners thus directly hitting the hygiene at food cooking place hard. The dreaded flies in rainy season enjoy the unhygienic place, and, subsequently the food. And the fly-touched-eaten food sometimes take the toll of students by way of gastro, cholera, diarhhoea etc. Apart from flies, the other filthy insects like cockroaches, ants “roam freely” spreading more and more unhygiene. The cooking place is not cleaned on the same day. It is left as it is for the next day. Many times the utensils with half eaten food is left in the same condition and cleaned the next day. But the half eaten food gets stale and the foul smell grips the school. Sometimes fruits are distributed in the schools but only among the teachers, other staffers, and some students as a token.

PARENTS ASK WARDS NOT TO EAT KHICHDI: The horrible Bihar tragedy, which claimed lives of more than 28 kids, in minds the parents bluntly tell their kids not to eat the Mid-Day Meals at all. This means a huge quantity of food remains unconsumed, and thrown in gutters or taken home by teachers, other employees of the school.

KITCHENS NEAR TOILETS: Most of the students are served food in lines and the students eat the food at a place of their choice. The scanner found to his utter shock that in many schools the kitchens are right near the toilets.

The scanner desired the schools follow the measures for proper Mid-Day Meals scheme:

1)      The Rice sacks should properly be given protection from pests.

3)      Raw rice should be fully-cooked and not half cooked

5)      Plates should be properly utilized and cleaned

8)       All students should be served with the same food

9)       A watch should be kept on students whether washing and cleaning their hands after the food.

The scanner found that the problem of Mid-Day Meals is storage of raice sacks and grocery in a protective manner, lack of hygiene in kitchens. The Government should have launched the Mid-Day Meal scheme after ensuring proper infrastructure in the schools to handle the good-intentioned scheme.