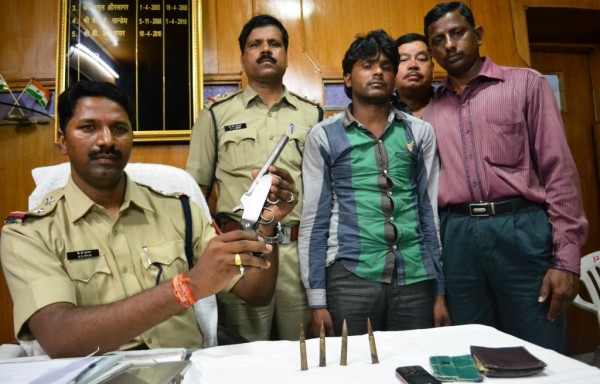 Nagpur News:  In today’s very, very and very difficult situations on almost all fronts wherein the citizens are finding themselves helpless in dealing with the issues of their concern then it may be education or employment or business or marriage or food or transport and so and so on other crucial matters necessary for living a life and sustaining it anyhow. It is really, really and really hard. However, one thing, now-a-days is easily available. And that is Desi Katta (Country-made pistol), mauser gun, sixer gun, and rifle. Don’t be surprised!!!

In recent days when crimes related to attacks on common citizens or policemen or business community and the weapons used for the attacks several above-mentioned weapons were seized from the arrested culprits involved in the crimes. However, the moot question is: From where the weapons are brought and how the anti-social elements get them so easily? Police as well as common people have got information that the deadly weapon have been sold openly Khaparkheda areas in Nagpur district. And the hubs in Khaparkheda areas are Sillewada, Valni, and Chankapur. People surmise that if the police or concerned authorities carry out a “search operation” at these places a large stocks of Desi Kattas, Mauser guns, Sixer guns, and rifles could be seized, and, a scam involving some infamous or famous citizens, could be exposed.

Recently, under Khaparkheda Police Station jurisdiction, a series of murder cases, dacoities, looting cases and other grave crimes were reported. Most importantly, the weapons used in most of the crimes, were Desi Kattas (single round fire), Mauser guns Ten-round fire), Sixer guns (Six-round fire), and rifles (single round fire). The frequent incidents of such crimes have created a panicky situation among the common people and raised the question of their security.

However, the Senior Police Inspector of Khaparkheda Police Station Sayyad Iqbal launched an operation to curb the crimes, and, succeeded in the operation, too. It may be recalled, the Khaparkheda area is known for industries and factories, small or big. Most importantly, Khaperkheda Thermal Power Station is based in the area. The people in large number from far away states like Madhya Pradesh, Chhattisgarh, Bihar, Uttar Pradesh have come here for jobs or setting small or big factories and industries. These people are based particularly at Sillewada, Chankapur, Valni, and Bhanegaon. These places have been categorized as sensitive areas as small-big criminals possess Desi Kattas, Mauser guns, Sixer guns, and rifles, knives, “guptis” etc.

Another negative part of increasing crimes is that the Khaparkheda Police Station has to deal with a large area spread in the long distance under its jurisdiction. Whenever a serious crime takes place, the police have to traverse long distance, and taking advantage of this situation, the offenders succeed in fleeing the spot of the crime. Looking to the lacuna, people as well as police have been demanding the Rapid Action Force since past many months but the file licking dust in the shelves of concerned authorities. Valni, Chankapur, Sillewada areas hogged the limelight when the murder of one Anwar in Valni on June 26, 2010. And from that incident a series of serious crime started increasing putting the lives of people in jeopardy.

However, when police had arrested Raju Suryavanshi and Rajkumar Domke for embezzlement of money belonging to workers Khaperkheda Thermal Power Station, police had seized a Desi katta and a Mauser gun from their possession. Recently in Nagpur, too, two police teams wre fired upon by the dreaded goon Raja Ghaus. The incident opened the eyes of police higher ups and, an investigation to get information from where the weapons come and who is selling them and to whom the weapons were sold, was initiated. Police have come to know a hotel in the area being the hub for stocking and selling the deadly weapons. Another factor which is triggering the increase in crimes is umpteen numbers of youths are jobless and the possibility that they might indulge in serious crimes could not be ruled out.