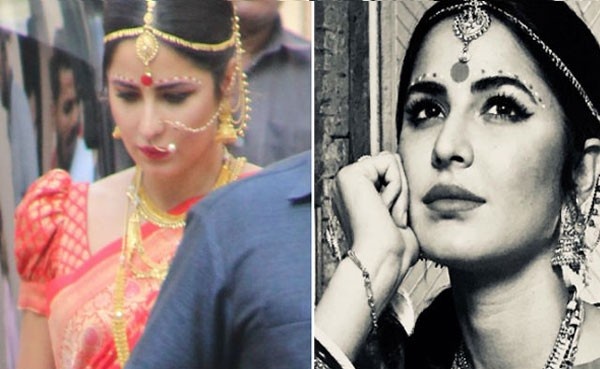 Katrina Kaif was dressed as a traditional Bengali bride for a scene in her upcoming film Zero. Katrina, 34, looked resplendent in a red benarasi sari festooned with a gold necklace and matching maang teeka and jhumkis along with shakha pola. Katrina was spotted on the sets of the film at a studio in Mumbai but it was the picture she shared on her Instagram account, which won our heart. The black and white photo of Katrina was taken by her Zero director Aanand L Rai. We also spotted Shah Rukh Khan, who plays the role of a dwarf in Zero, at the Mehboob studio on Tuesday.

But first, take a look at Katrina Kaif’s Instagram post, which has over 6 lakh likes as of now:

Zero also stars Anushka Sharma, who reportedly play the role of a struggling scientist. Anushka Sharma is reportedly in Bengaluru to spend some time with her husband Virat Kohli, who is currently busy with the Indian Premier League – he’s the captain of Royal Challengers Bangalore. Earlier this year, Anushka had filmed some portions of Zero and later assigned her dates to Sui Dhaaga.

Shah Rukh, Anushka and Katrina are collaborating for the second time after 2012’s Jab Tak Hai Jaan. Zero is expected to release in December.