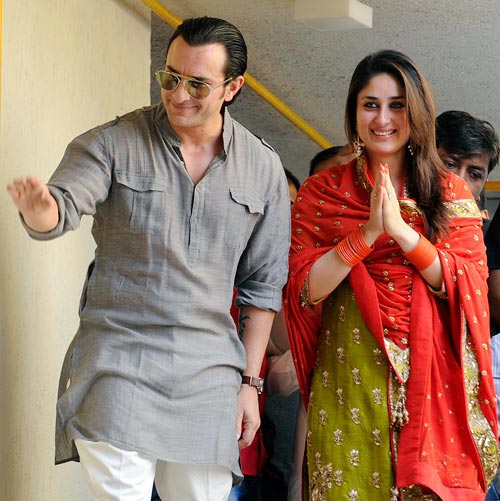 The media and public had begun gathering at Fortune Heights (their residence), Khar, the previous last night. The registrar Surekha Lohar, who was supposed to arrive around noon, was delayed by over an hour. Later, on her way out, she informed us, “There were three witnesses, along with Saif’s sisters Soha and Saba Ali Khan.”

The witnesses apparently were Kareena’s father Randhir Kapoor and sister Karisma Kapoor (she came with kids Samaira and Kiaan Raj) and Saif’s mother Sharmila Tagore. Babita was present too.

Saif and Kareena at their Khar residence soon after registering their marriage The huge crowd outside Fortune Heights included students from a nearby school. They stood in the scorching heat with their notepads and pens, hoping to get autographs from the star couple. Some even yelled out, “Kareena, please come out.”

She finally did, wearing a beautiful green salwar suit with a red dupatta. Saif wore a grey kurta. About 45 minutes after the ceremony, the two came out to the terrace and waved out to the crowd, for the first time, as a married couple. The security today was tighter, with guards present in the adjacent buildings too. At one point, the situation outside the house became so chaotic that an additional police van had to be called in.