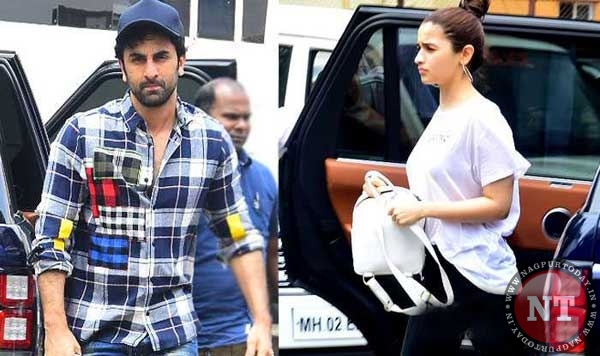 Ranbir Kapoor and Alia Bhatt have been making headlines every since they started filming Ayan Mukerji’s upcoming film Brahmastra. And now, when the duo has accepted dating each other, they have become a favourite of the shutterbugs. Ranbir and Alia leave no opportunity to hog limelight. Each time they step out together, they never fails to give us major couple goals. Recently, we’ve have got our hands on the pictures that only confirm that they are dating each other. Ranbir Kapoor and Alia Bhatt were spotted together at Mehboob Studios. In fact, they came together in the same car and looked happy while posing for the shutterbugs.

Surprisingly, what caught everyone’s fancy was Ranbir’s tee that has “approved” written on its back. Seems like, the actor is confirming his relationship with Alia not just by making statements but with his style statements too. In the pictures, Alia can be seen dressed in her casual best. She sported a long white tee with black leggings. While Ranbir looked dapper in checkered t-shirt with blue denims. These pictures are definitely giving us major couple goals.

For the unversed, earlier while talking about the relationship they share, the Sanju actor told GQ magazine, “It’s really new right now, and I don’t want to overspeak. It needs time to breathe and it needs space. As an actor, as a person, Alia is – what’s the right word? – flowing right now. When I see her work, when I see her act, even in life, what she gives is something that I’m aspiring to for myself. It’s new for us, so let it cook a bit.”

However, when Alia was asked about how she feels about her relationship with Jr Kapoor, the actress played safe. While talking to Hindustan Times, she said, “I haven’t asked Ranbir. I don’t know how he feels about those rumours. He won’t feel anything as he will be exactly like me (smiles). But there is nothing to feel. There’s no need to clarify or deny anything. He is a very good human being, and I am very fortunate to be around him at this point in my life.”